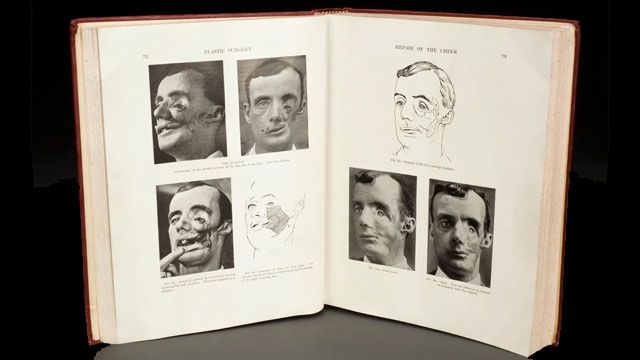 Who was the father of modern plastic surgery?

To understand how plastic surgery developed and evolved over time, we need to go back through history to the chaos of World War I. Although facial reconstruction was not a new surgery at the time – rudimentary nose operations are said to have been performed in ancient India – the demand for facial surgery had never been greater.

Advances in battlefield technology that killed an estimated 8.5 million people also left 280,000 men from France, Britain and Germany with facial disfigurement. Rather than being treated as heroes, these soldiers were ostracized upon their return from war.

Harold Gillies, a British surgeon, was at the epicenter of the burgeoning field of plastic surgery during the war, working to repair the faces of veterans.

A far cry from the sterile operating rooms, anesthesia and antibiotics used in modern plastic surgery, Gillies’ work environment made the operations he performed risky.

The anesthesia used was either a chloroform cloth over the patient’s mouth or a very basic mask that delivered ether. The problems with this approach were twofold. The mask or cloth would disrupt the operating field and the surgeon could end up inhaling the vapors himself. Additionally, Gillies operated in a time before penicillin existed, which meant that if a patient contracted sepsis from surgery, there was not much that could be done, increasing the risk of death.

The surgeries themselves were complicated – they were tailored to each patient, with some patients needing multiple operations over a period of years. The complexities of each surgery led Gillies to develop some of the pioneering techniques used in modern plastic surgery. For example, he could make a nose from a patient’s rib and take cartilage from the shoulder to form the nose bridge, before grafting it onto the patient’s face.

Another technique commonly used for facial reconstruction involved making a deep incision near a wound on the face to mobilize tissue, allowing a surgeon to maneuver the skin to cover damaged areas, while maintaining blood supply to the tissue graft.

Gillies’ work in World War I prepared him to perform further surgeries throughout World War II, where he continued to pioneer new surgical techniques, this time in genital reconstructive surgery for injured pilots. This in turn led him to perform the first phalloplasty – the formation of a penis by surgery – in the late 1940s.

The plastic surgery techniques pioneered by Gillies helped “plastic surgery flourish and usher in a new era”, according to Dr. Lindsey Fitzharris, author of Harold Gillies’ biography: The Facemaker: One Surgeon’s Battle To Reend the Disfigured Soldiers of World War I.

Did the cough become a pain in the back?