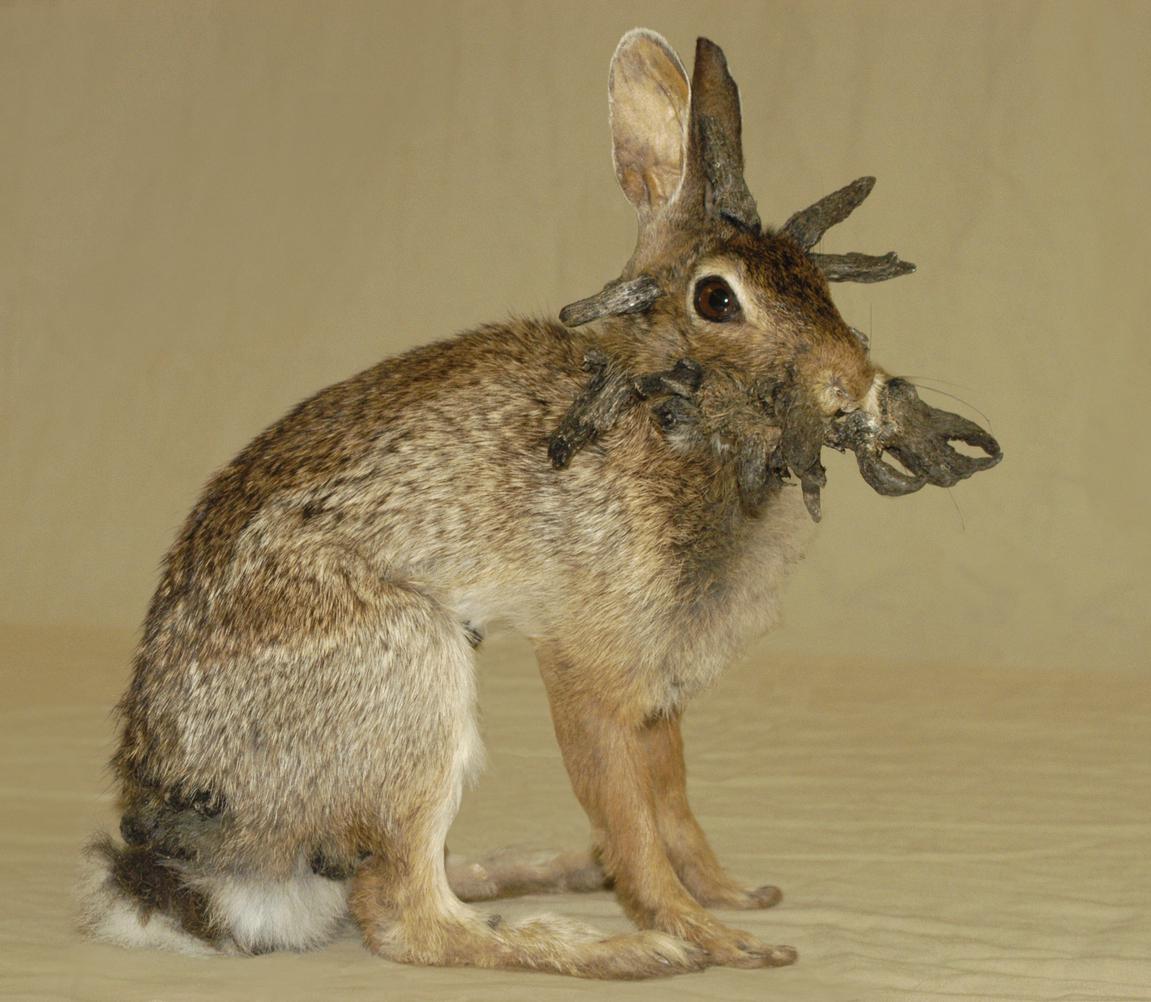 What Rabbits With HPV Can Teach Us About Vaccination Hesitancy

In the heart of San Francisco’s Mission District is Paxton Gate, a strange little shop specializing in “curiously mind-blowing treasures and oddities” and stuffed to the ceiling with stuffed mounts of springbok, gazelle, wildebeest, moose and a giraffe with a graceful neck 6 feet long. Beneath the mounts are natural artifacts of every conceivable sort, from spectacular collections of butterflies and moths to the skulls, teeth and even the baculum (penis bone) of a red fox.

It was there that I took a one-day taxidermy workshop during which I learned how to create the most delicious of imaginary animals: the jackalope. Iconic in American popular culture, the jackalope is that strange rabbit hybrid you’ve seen sporting antlers inexplicably. Jackalope hoax taxidermy montages date back to the 1930s, and since then the weird bunny has spawned a vast industry of kitsch, a tacky postcard, oven mitt and snow globe all at once. The horned rabbit is so prolific that its image now appears in books, songs, movies, video games and visual art, not to mention beer cans and wine bottles and human biceps as tattoos.

But the least known and most fascinating thing about the jackalope is that it is related to “horned” rabbits, which do exist. During the medieval and early Renaissance periods, the horned rabbit was erroneously taxonomized by naturalists as Lepus cornutus, a separate species. A rabbit’s “horn” is actually a keratin carcinoma, a sometimes cancerous growth caused by infection with Shope’s papillomavirus, named after Richard E. Shope, the virologist who first identified the cause of the strange growths in rabbits. . Shope’s pioneering studies of horned rabbits in the 1930s advanced medical science by providing the first mammalian model of virus-induced cancer. The work that followed those studies, by researchers including Nobel laureates Peyton Rous and Harald zur Hausen, proved what was once a controversial proposition: viruses cause certain types of cancer.

Among the oldest and most common viruses, papillomaviruses infect a wide range of species. Human papillomavirus, or HPV, infection is so common that most sexually active people will contract the virus; the Centers for Disease Control and Prevention estimates that 43 million Americans had HPV infections in 2018. Since HPV is so common and most infections are mild, chances are you’ve had HPV without the knowledge. However, HPV can cause precancerous lesions or warts that can ultimately lead to cancer, which often develops decades after infection. HPV can cause cancers of the cervix, vagina, vulva, anus, penis as well as oropharyngeal cancers such as cancer of the throat, tonsils or mouth. It is estimated that HPV causes approximately 50% of penile cancers, 70% of vulvar cancers and 80% of anal cancers.

Cervical cancer statistics are truly startling: 99.7% of cervical cancers contain DNA from high-risk HPV types. Despite resistance from the scientific community to the discoveries of early virus researchers like Shope and Rous, we now know that approximately 11% of cancer deaths worldwide are caused by viruses, which are the second most common risk factor. important for cancer, behind smoking. .

Thanks to the work of several generations of epidemiologists, virologists and oncologists, a safe and effective HPV vaccine was developed and approved for use in 2006. The nonavalent vaccine Gardasil 9, which protects against nine different strains of HPV potentially dangerous, was approved in 2014. The expanded coverage it offers means the vaccine now protects against cancers of the cervix, vulva, vagina, anus and oropharynx, as well as against genital warts.

According to CDC guidelines, the ideal age for the vaccine to be given is 11 to 12 years old, before children have been exposed to strains of HPV that make the vaccine less effective, although it can be given as early as 9 years old and is recommended for everyone up to 26 years old. of age. (It may also be given to people between the ages of 27 and 45, based on discussion between the patient and their doctor.)

The CDC, Food and Drug Administration, and a wide range of professional medical societies, including the American Academy of Family Physicians, have approved its use. The HPV vaccine is also on the World Health Organization‘s Model List of Essential Medicines, drugs deemed so safe and effective that they are considered essential to a functioning health system.

Despite the existence of this remarkable vaccine, cancers caused by HPV remain a significant cause of death. GLOBOCAN’s global cancer estimates for 2020 are sobering. That year, 58,000 people died from cancers of the vagina, vulva, anus and penis. Another 177,757 lost their lives to cancers of the oral cavity. While improved screening, in the form of Pap tests, has dramatically reduced the incidence of end-stage cervical cancer in developed countries, the disease still killed 341,831 people. In much of the world, this mortality is due to a lack of access to the HPV vaccine. However, even in the United States, where the vaccine is widely available, the CDC estimates that each year approximately 19,400 women and 12,100 men suffer from cancers caused by HPV and that more than 4,000 women die from cervical cancer. the uterus. In addition to the terrible human costs, the monetary price is also staggering. In 2018 alone, the direct medical cost of treating HPV infections in the United States was approximately $16 billion.


But if the HPV vaccine is safe, effective and accessible, why are so many of us suffering and being killed by cancers caused by HPV? Although the answer is complex, a few major factors are clear.

Awareness of the importance of getting the HPV vaccine appears to be low among young people. A study that examined Los Angeles County college students’ awareness of HPV-related illnesses and vaccination found that approximately two-thirds of men and half of women surveyed were unaware that the HPV vaccine was recommended until at the age of 26. Less than half knew they could get vaccinated at college student health centers or neighborhood clinics.

There also remains a substantial problem of vaccine hesitancy and resistance against HPV, which has historically been the most frequently denied of mainstream vaccines. One of the main reasons for this resistance stems from the fact that the vaccine was initially marketed as protection against sexually transmitted infections rather than as a means of preventing cancer. Many parents have bristled at the thought of giving their 11 or 12 year old child an STI vaccine. However, the crucial point, which parents sometimes misunderstand, is that the vaccine should be given to children at this age not because they are sexually active, but rather before they are sexually active.

Although HPV vaccination rates have improved over the 15 years the vaccine has been available, they remain far too low. The most recent data from the CDC indicates that just over half of adolescents in the United States are up to date with HPV vaccination (58.6% in 2020), leaving millions of young women and men vulnerable to largely preventable cancers. Additionally, in the history of the HPV vaccine, we see a parable of our current situation with respect to the COVID-19 vaccine. In both cases, a deadly combination of lack of awareness, miscommunication and mistrust has caused too many people to risk their lives, as well as those of their family, friends and neighbors. The fact that the study of real jackalopes ultimately led to the development of the safest and most effective antiviral cancer vaccine ever devised is a scientific miracle. That so many of us do not enjoy the protection it provides is nothing short of a tragedy unfolding in slow motion.

Michael P. Branch is a foundation professor at the University of Nevada, Reno. Her new book is “On the Trail of the Jackalope: How a Legend Captured the World’s Imagination and Helped Us Cure Cancer.”