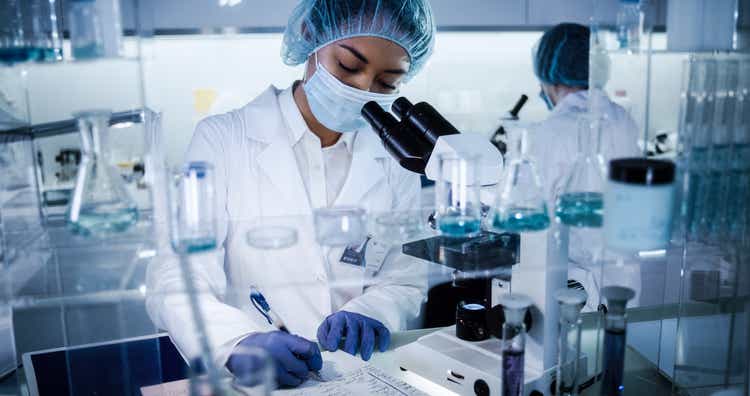 Xbiome, a Shenzhen-based microbiome drug development company, has secured the rights in China to an inflammatory disease therapy developed by Aurealis, a Swiss synthetic biology company, in a deal worth up to $139 million (see story). Xbiome will develop AUP-16 in Greater China for diabetic foot ulcer (DUP) and other chronic wounds. AUP-16 is a genetically modified Lactococcus lactis, a non-pathogenic probiotic bacterium. Last month, Xbiome completed a B+ financing of nearly $100 million. It has been approved to begin US trials of its lead program, an oral microbiome therapy for graft-versus-host disease.

Suzhou’s Cure Genetics has closed a $60 million Series B funding round to advance the clinical development of its cell therapy candidates for hematologic and solid tumors. Cure was created by CRISPR pioneers in 2016 to develop therapies for hard-to-treat cancers and genetic diseases. Its CRISPR-mediated single or multiplex gene editing platform aims to produce more effective or safer cell therapy products, including universal CAR-T candidates. The funding round was led by Advantech Capital and joined by Oriza Holdings, Blue Ocean Private Equity and Qiming Venture Capital.

Grand Pharmaceutical of Hong Kong (OTCPK:CGPHF, HK:00512) has acquired broader rights in China to the Saturn transcatheter mitral valve replacement (TMVR) system developed by InnovHeart of Milan (see story). Grand Pharma will invest in InnovHeart, in addition to paying upfront license fees, milestone payments and structured royalties. InnovHeart said the transaction, including participation from other investors in the Series C funding, would total up to $55 million. Grand Pharma led the Series C round. It was joined by existing investors Genextra, Panakes Partners and Indaco Venture Partners.

Xiamen Biotime Biotech has licensed a set of five (mostly preclinical) drug assets from Adlai Nortye, a Hangzhou-based oncology company, in a deal worth at least $32 million . Adlai Nortye has built a pipeline of 10 candidates. Biotime, known for its point-of-care diagnostic devices, has recently moved into drug development. It will have rights in China, including the manufacturing of two of the candidates, and global rights to the remaining three molecules. China-only candidates are an oral small-molecule PD-L1 inhibitor and a novel humanized IgG1 (variant) anti-hTNFR2 antibody.

Ractigen Therapeutics, an aRNA company, has closed a Series A+ funding totaling $30 million to bring its portfolio of 10 programs to clinical trials. aRNA is based on short duplex RNAs, known as small activator RNAs, which upregulate targeted endogenous genes, increasing the production of silenced therapeutic proteins in diseased cells. Ractigen will also increase its oligonucleotide manufacturing capabilities. A year ago, Ractigen completed an $18 million Series A round. The A+ round was led by SDIC Venture Capital. The company is located in Rudong Life Science and Health Industry Park, Jiangsu Province.

Ignis Therapeutics, a Shanghai-based SNC company, has acquired the Chinese rights from NeuroSigma of Los Angeles to a device that treats attention deficit hyperactivity disorder (ADHD). The Monarch eTNS system is based on external trigeminal nerve stimulation (eTNS). In the United States, the device is approved for use in children with ADHD between the ages of 7 and 12. NeuroSigma thinks it could also be an effective treatment for depression and epilepsy. In 2021, Ignis was established by South Korean company SK Biopharma to bring SK’s CNS pharmaceutical assets to China. It raised $180 million in an A round led by 6 Dimensions.

Shanghai I-Mab (IMAB) has partnered with Hangzhou Qiantang New Area to build a manufacturing plant for its transition to commercialization (see story). I-Mab Hangzhou’s initial product will be felzartamab, an anti-CD38 monoclonal antibody that has completed phase III trials as a third-line treatment for multiple myeloma. The facility has already begun pilot manufacturing operations, including process development and analysis labs. The construction of an 80,000 square meter manufacturing plant was completed in December 2021.

Suzhou ImmVira has begun pilot-scale manufacturing of its next-generation herpes simplex virus (oHSV) oncolytic vector, which ImmVira will use to enable CAR-T treatment of solid tumor cancers. The vector will cause the tumor to express antigens that CAR-T therapy will recognize. ImmVira will use the herpes simplex virus (oHSV) vectors to conduct pharmacology and toxicology studies for IND filings in the United States and China. The company is developing its own CAR-T therapies to follow the oHSV product and is seeking partners for additional candidates.

Applied Pharmaceutical Science has received approval to begin US trials of its next-generation selective RET inhibitor, a proposed treatment for solid-tumor RET cancers. APS, a Beijing-Philadelphia company, is a precision cancer therapy biotechnology company that develops cancer therapies based on cancer genetics, protein structure/function, synthetic medicinal chemistry, and verification through experimentation and the calculation. The trial will recruit patients with solid tumors with RET gene alterations or resistance to first-generation RET.

Editor’s note: The summary bullet points for this article were chosen by the Seeking Alpha editors.