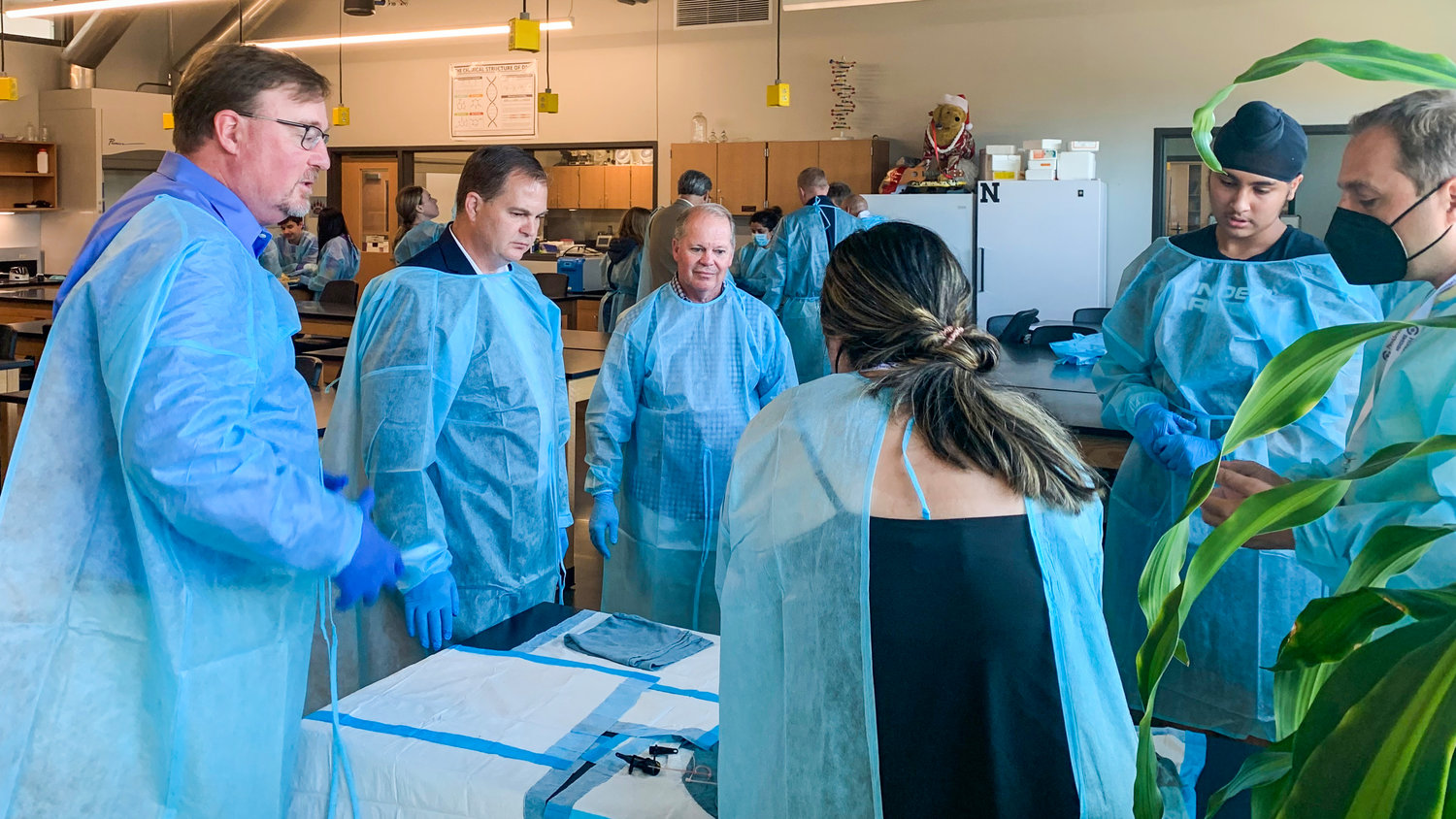 The three legislators from the 20th Legislative District – Representatives Ed Orcutt and Peter Abbarno and Senator John Braun – were at WF West High School on Wednesday afternoon to observe student activities at the science, technology, engineering and math camp ( STEM) of the school. The camp, which is held annually with assistance from the University of Washington (UW) and the Chehalis Foundation, involves a variety of STEM-based activities. It was open to students from all over the area for $25. This year’s STEM camp was organized with the support of the Institute for Stem Cells and Regenerative Medicine (ISCRM) and the College of Engineering at the University of Washington.

The lawmakers were joined by a group that included administrators from the University of Washington and the Chehalis School District as well as representatives from the Chehalis Foundation. They were taken to the school’s STEM wing where they heard UW representatives speak before they had a chance to participate in student activities.

“We have a certain champion in the Senate,” ISCRM director Chuck Murry said, alluding to Braun.

Murry told the group that the UW views community outreach, including its work at WF West’s STEM camp, as a crucial part of its role as a public university.

“We’re a state university and we love getting out into the community,” Murry said. “Part of what we hope to do is promote life science industries in the community. I wish our state was not only known for its aerospace and computer industries, but also for its regenerative medicine.

While it may seem unusual for Washington’s flagship university to have such a large presence in a rural community, UW views the camp as part of its community outreach mission, a mission that exists, in part, thanks to May -being Chehalis’ most notable export. , Orin Smith, the former CEO of Starbucks who donated a large sum of money to the community before his death.

“Orin was regent at UW. I worked with Orin and it was his alma mater here, as was the UW and he wanted to bring the university to the community,” Randy Hodgins, vice president of external relations at UW, told About Smith, who grew up in Chehalis.

“We don’t have a huge presence in Southwest Washington and we thought it would go really well with the focus on STEM here at WF West. We bring undergraduate and graduate programs here and the kids just eat… We’re happy to be back, we’re happy to be here again and hope to make this a long-lasting (event). We work with the district (so that) whatever works is what we want to do. Lewis County is just as much part of the state as anywhere else.

“I think it’s a really cool new experience because it’s unlike anything I’ve done before and I’m learning more career paths and opportunities for the future,” Bryce Kuykendall said. , a 16-year-old student at WF West.

“The experience gave me a broader idea of ​​biology and careers, which are very broad,” added Shivtaj Dhudwal, a 15-year-old student at WF West.

During the camp, students and legislators who came to observe had the chance to participate in various activities. Activities included inflating pig lungs with a pump to see what breathing looks like, holding a human brain, touching the lungs of someone who died of COVID-19, and using a device that when wires are attached to the arms of two people, allowed one person to move another person’s arm with their own by sensing nerve activity.

“It’s fascinating,” Abbarno said. “It didn’t hurt, but you could definitely feel it.”

The excitement about the learning opportunities that STEM camp offers hasn’t just been felt by the students.

“It’s been amazing, the medical side of things. Lots of little mini-lessons that last about 45 minutes or an hour and get kids excited about medical topics,” said WF West math teacher Chris White.

Bob Walters, director of WF West, said the school’s STEM camp has evolved over the years, and since partnering with UW several years ago, the camp has grown.

“We connected with UW and I think they were also aware of our new STEM wing. They also have an awareness program. The medical program and the engineering school were able to work with us and they grew from there,” Walters told The Chronicle.

But students and staff weren’t the only ones impressed with what they saw at camp. Researchers who traveled from Seattle to teach at the camp were also impressed, particularly with the technology high school students have access to at WF West.

“Do you have a scanning electron microscope?” It’s incredible ! Nate Sniadecki, professor of mechanical engineering and associate director of ISCRM, told The Chronicle.

“It’s really cool that you have one right there in the other room!” Kendan Jones-Isaac, a UW Ph.D. student studying pharmacy, told a group of students while teaching them about an experiment he had been involved in finding kidney stones in astronauts.

For state lawmakers watching the activities, the camp was an example of the kinds of learning experiences that can benefit children and open their eyes to the opportunities available to them.

“This STEM camp is a great opportunity for student learning – and if that was all it did, it would bring huge benefits to students,” Orcutt said. “But it also gives students an introduction and insight into potential career opportunities and builds excitement into the possibilities of following one of these career paths. The courses we have seen today will not only benefit students in choosing their studies and career paths, but when they choose one of these career paths, it can also lead to the advancement of health care and increased availability of health professionals – a benefit for everyone.

For Abbarno, the camp was the type of experience he hopes to offer statewide to inspire more students to learn.

“STEM Camp is an incredible educational experience for our local students and is a product of partnership. The program ignites our students’ passion for science, technology, engineering, and math, which helps cultivate a life of learning and exploration. This is exactly the type of program we want to support and replicate across the state,” Abbarno said.

Braun saw the camp as an opportunity to help students recover from learning loss suffered during the COVID-19 pandemic while getting them excited about potential new career paths.

“I was happy to visit the STEM camp organized through a partnership between the University of Washington and the Chehalis School District. I was impressed,” he said. “Students were clearly involved in the content. Distance learning and other COVID-related restrictions have taken their toll on our children and resulted in learning loss that has left our graduates unprepared for higher education. Partnerships that enrich the curriculum and excite children about what comes after high school could be an important tool in offsetting this loss. This camp, which emphasizes engineering and the medical field, is taught, in part, by university students. Peer education is effective, especially with teenagers. And exposure to industry leaders goes beyond what students get in the standard public school curriculum. I hope to see more of these programs implemented statewide by UW and other universities. It’s a bridge our children need right now to get back on track.