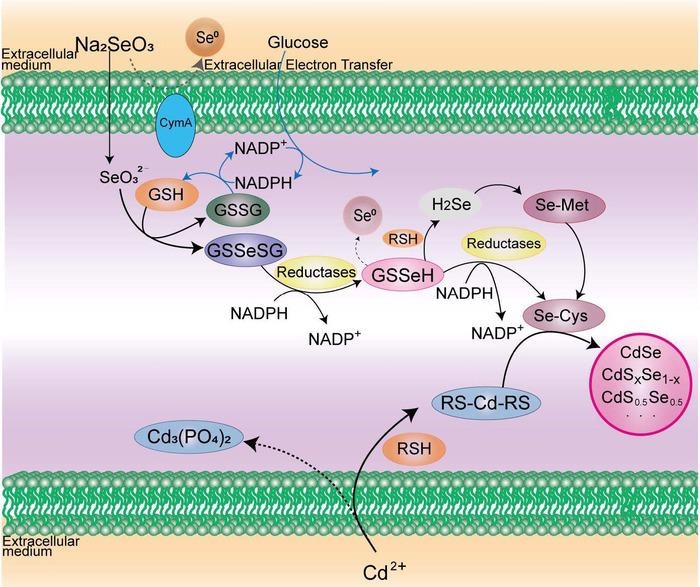 Synthesis of living cells coupled to the space-time of nanocrystals

Over the past decade, the cell has been used as a powerful tool to perform sudden tasks using artificial regulation.

A cell has the ability to function as a potential chemical factory, provided that several reactive intermediates are produced in advanced metabolic processes and the subtle redox balance helps cell homeostasis.

But even now, it is considered difficult to direct such reactions and pathways to synthesize preferred products as they naturally exist in various spatiotemporal dimensions inside the cell. Professor Dai-Wen Pang’s group suggested a concept of “synthesis of living cells coupled space-time nanocrystals.”

It specifically synthesizes nanocrystals by precisely and intentionally coupling a range of intracellular redox reactions and metabolic pathways, in an appropriate spatial and temporal sequence in living cells.

Take the example of yeast cells, fluorescent semiconductor CdSe quantum dots (QDs) with tunable emission wavelengths could be synthesized by coupling the intracellular reductive metabolism of sodium selenite (Na2SEO3) with the activated detoxification of the cadmium ion (Cd2+).

By properly manipulating the metabolic pathways of glutathione, the yield of QDs could be significantly increased, indicating the crucial role of glutathione throughout the generation of CdSe nanocrystals.

This attractive scheme for the synthesis of living cells from nanocrystals has now been extended to mammalian cells and bacterial cells. Notably, cell-derived microvesicles can also be efficiently labeled in situ with intracellularly synthesized QDs.

Due to their excellent fluorescent properties, high intrinsic extinction coefficient, and biocompatibility, synthesized intracellular QDs and QD-containing cells have successfully converted into nanobiosondes for biodetection, having a relay of electrons and d energy in an artificial photosynthesis system also being manufactured.

Inspired by the aforementioned mechanisms, so-called cell-free quasi-biosynthesis systems that mimic intracellular reactions have been designed to manufacture a range of nanocrystals under mild conditions, such as alloy nanoparticles, noble metal nanoparticles, QDs fluorescent and functionalized, as well as other inorganic nanocrystals.

This versatile quasi-biosynthesis tends to be very flexible and diverse, which has further strengthened the methodology of biosynthesis.

The living cell, known as a reservoir of biochemical reactions, has the potential to act as an amazing combined chemical factory where the nucleation and growth of nanocrystals, precursor formation and functional assembly can be performed with precision through artificial programming. . But the current artificially regulated synthesis simply uses the tip of an iceberg of metabolic pathways.

We hope to inspire more researchers to explore new strategies and mechanisms to produce various multifunctional crystals and even complex heteronanostructures. The concept that we have proposed will allow researchers to better exploit the unforeseen potentialities of living cells, will open a new window for the field of synthetic biology, and highlight the interdisciplinary studies of biology, chemistry and medicine.