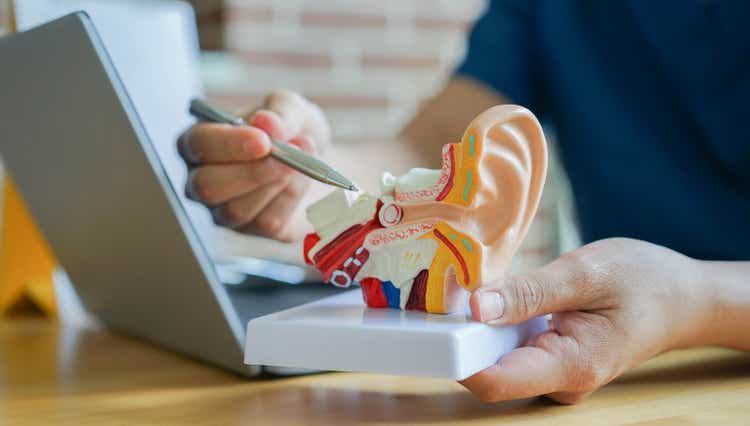 Otonomy, Inc. (NASDAQ: OTIC) has a comprehensive pipeline of actives targeting ear disorders. There are few competitors working in the space, and the indications they target are big indications, including tinnitus and hearing loss. Neurotology is an unconquered frontier and otonomy tackles some of the most challenging indications.

One in eight Americans suffers from hearing loss, and there are no FDA-approved drugs. Promising initial data has been generated by Otonomy in these indications. However, expectations must be tempered with a realistic assessment of the obstacles and history of these indications, which includes many outright failures.

Background to drug development in the ear

Drug developments in disease states with difficult to explore and poorly understood biology, such as the inner ear and the brain, are among the most challenging. There is no approved treatment for tinnitus (ringing in the ears or perception of sound) or hearing loss. Although there are theories about the processes underlying these symptoms, the basic biology is poorly understood.

Tinnitus and hearing loss are clinical presentations that arise from a diverse set of circumstances and therefore may have a variety of causative mechanisms. Finding treatments in indications with a heterogeneous patient population is particularly difficult. Conducting clinical trials is difficult because of the attempt to build a homogeneous cohort. The interpretation of efficacy signals in small trials is particularly difficult given this heterogeneity. Even determining which standardized tests give consistent results in untreated patients is a challenge. Since there are no approved therapies, the tests and regulatory parameters that will be accepted by the FDA are also unknown.

Perhaps more importantly, tinnitus and hearing loss are conditions where there are no biomarkers that predict efficacy. Drug targets are essentially “guesses” based on theories about the causes of these disorders. Development efforts are likely to be an iterative process where learnings about patient selection, dosing and endpoints inform future trials.

ENTs perform a variety of surgical procedures, but an additional difficulty is that delivering medication to the inner ear is invasive due to anatomical constraints. Reaching the cochlea and inner ear is done by intratympanic injection, where a needle is passed through the ear canal and then through the eardrum to deliver medication into the middle ear space. Most drugs require sustained exposure to target tissues, and achieving this in a hard-to-reach location where prolonged drug exposure may be required presents an additional challenge.

Precedent suggests that developing therapies for these indications is an extremely difficult task. Auris Medical, Otonomy and Frequency Therapeutics all posted disappointing results. Sensorya French biotech, recently announced that its candidate had not met the endpoint of a study on hearing loss.

OTO-413 is an intratympanic injection that consists of brain-derived neurotrophic factor (BDNF), a naturally occurring protein thought to be able to repair damaged cochlear synapses. A study published in The Journal of Otolaryngology – Head and Neck Surgery describes the ability of BDNF to improve hearing in an animal model. The authors concluded: “Brain-derived nerve growth factor (BDNF) plays an important role in cochlear development it is therefore plausible that it can restore hearing loss if administered directly into the cochlea. The OTO-413 formulation is designed to give sustained exposure to BDNF for a few weeks in the cochlea. Preclinical and animal studies have shown that intratympanic administration of OTO-413 can migrate through the round window membrane to reach deep parts of the cochlea. This has been shown to restore synapses.

A Phase I/II trial of OTO-413 in 39 patients with speech-in-noise hearing impairment (most also had moderate hearing loss in quiet environments) was completed in December 2020. Patients trial participants reported hearing problems in a noisy environment. In the placebo-controlled dose escalation trial, OTO-413 was well tolerated and no serious effects adverse events have been reported.

Although there were 4 dose cohorts, only the ten patients in the high dose cohort had a significant response. Nine of these patients were evaluable, while the tenth patient had a response but did not complete the trial. A higher proportion of patients treated with OTO-413 achieving clinically meaningful improvement from baseline for SIN (speech in noise) testing at days 57 and 85. Response appears to be slightly better in the subset of patients with moderate to severe hearing loss.

Otonomy’s results look promising enough to pursue a larger trial to confirm an efficacy signal. The company is currently recruiting a phase 2a cohort in a randomized, double-blind, placebo-controlled study that will include 30 patients with hearing loss. Twenty patients will receive a single intratympanic injection of 0.3 milligrams of OTO-413 and the remaining 10 will receive an injection of placebo. Patients will be followed for three months and assessed for response on three speech-in-noise tests as endpoints. A reading is expected in early Q2 2022. Otonomy will also evaluate the 0.75mg and 1.5mg doses. The company plans to initiate additional dose escalation trials in 2022.

Otonomy closed an offering at $2.25 per share in 2021 to raise another $34 million and has $77 million in cash. Operating expenses were approximately $48 million for 2021 and the company expects cash to be sufficient through the second half of 2023. Available cash of $77 million will likely be insufficient to conduct phase 3 trials more important in both indications. However, the company may have institutional support and sufficient capital if the data is promising.

Therapeutic frequency received $80 million upfront for former US rights to their hearing loss treatment after showing promising Phase 1 data. This demonstrates that there is potential for an external partner to help fund further trials if Otonomy produces positive Ph 2 data.

Jay Lichter, Ph.D., a venture capitalist founded Otonomy with his ENT treatment after being diagnosed with Ménière’s disease, an inner ear disorder that causes hearing loss, tinnitus and vertigo. The company was founded in 2008 and David Weber, Ph.D., has been CEO of Otonomy since 2010.

Otonomy has a less than impressive five-year track record with shares dropping from a high of nearly $40 to $2.20 per share. Much of this rundown was due to OTO-104 (Otividex) failing to meet endpoints in a Ph 3 trial for Ménière’s disease in 2021. OTO-104 also had no did not meet the endpoint in a previous trial and the company burned a lot of cash following a questionable strategy to move forward with phase 3 trials. The stock price did not recovered despite the progress of programs against tinnitus and hearing loss.

Commenting on OTO-413, analyst Tyler Van Buren said it “appears active based on initial data” and suggested that OTO-413 “could generate a very significant peak level of sales, currently not quantifiable”, which is not reflected in the current share price.

Tinnitus and hearing loss are two of the most difficult indications, but they also represent billion dollar markets each. A therapy with even modest efficacy would likely be well received by patients and physicians. Otonomy is in the early stages of determining an efficacy signal for both tinnitus and hearing loss and cohort sizes are small. Thus, it is difficult to have a high level of confidence as to the reproducibility of the efficacy signal. Development is likely to be an iterative process to determine appropriate patient selection, dosing strategies and study design.

Without success in these indications, the company may have a difficult path to follow. A common mistake small biotech companies make is advancing assets with questionable efficacy despite poor results. Certainly, if mixed results or a weak signal emerge, investors may want to follow closely whether management makes an appropriate decision given the data.

If Otonomy is successful in Phase 2 for tinnitus or hearing loss, the company’s value will likely increase as investors recognize the large and lucrative market opportunity that lacks meaningful competition. The hearing aid market is around $10 billion and hearing restoration therapy would likely capture a large market share.

There are 13 million potential tinnitus patients, many of whom may want a simple injection to reduce the discomfort caused by ringing in the ears. A data readout for OTO-313 in tinnitus is expected later in 2022 and offers a second shot at the goal. Otonomy offers the classic biotech binary opportunity where investors must decide for themselves if the considerable risk is worth the potential considerable reward. Otonomy has many “shots on goal” (2 clinical and 3 pre-clinical) but since the chances of success are low, this is very necessary.

BA.2 COVID variant sweeping Asia and Europe is the most unpredictable yet