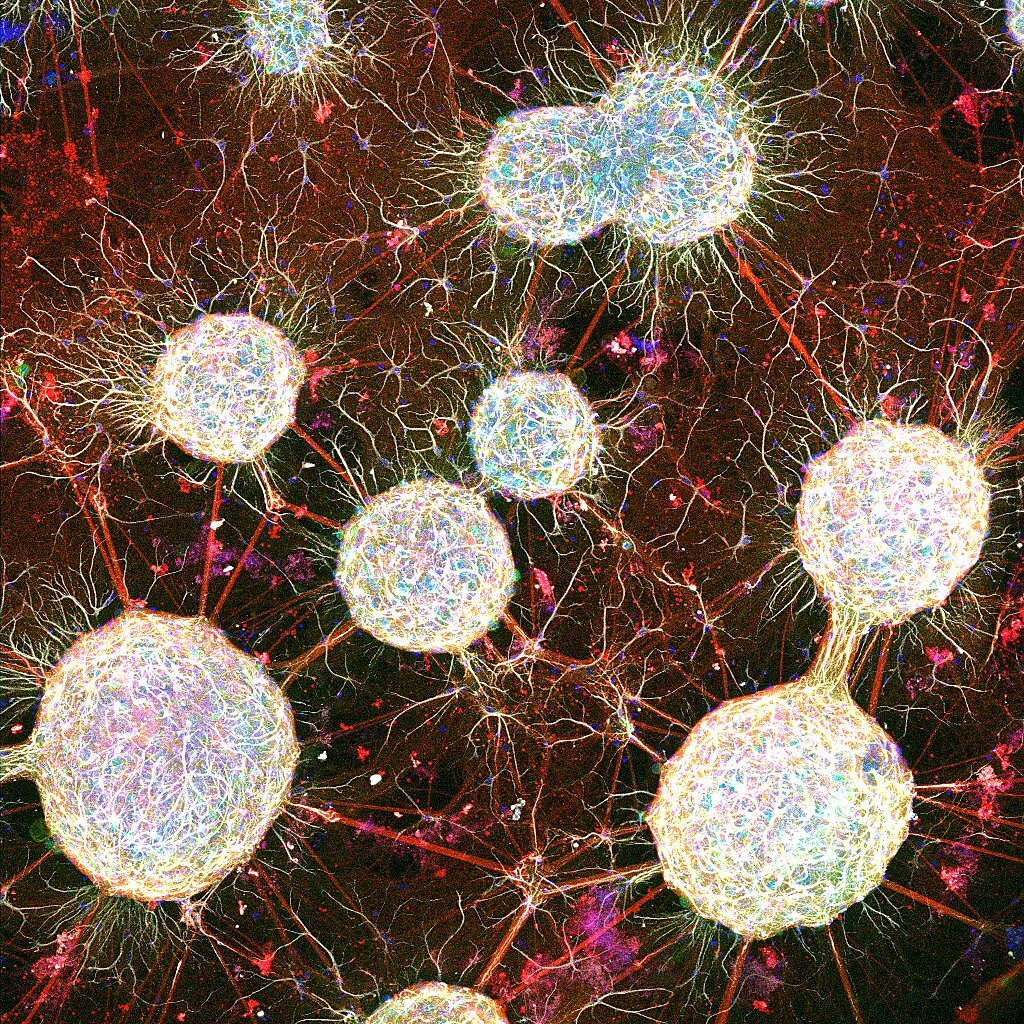 It was one of those coveted moments of serendipity in a scientific career.

Angeles Rabadan, Ph.D., left Raju Tomer’s lab at Columbia University for the day, but not before storing a small tube with the few remaining drops of a cell-rich solution in an incubator. . When she returned the next morning, she saw something that made her eyes widen. “Tiny balls had formed in the tube, and you could see there was something connecting them,” said Dr. Rabadan, associate neuroscientist in Columbia’s Department of Biological Sciences. Residual brain cells in the medium had aggregated overnight into tiny neural spheres.

Moreover, these spheroids had spontaneously interconnected into a network. When she showed Dr. Tomer the data from the first tests of the networks, the brain-like signaling he could see between parts of the networks made him realize that these networks could become a valuable new research framework for neuroscience. Scientists have dubbed these lab-grown interpretations of brain-like cell assemblies modular neural networks, or MoNNets.

What followed Dr. Rabadan’s moment of chance sighting in the summer of 2017 was a tantalizing research journey, now involving collaborators from at least eight Columbia departments and institutes. The team’s research findings to date, recently published in the journal Nature Communicationhave a chance to help the field of psychiatric medicine emerge from its long slump, say the researchers and others.

“For decades, there has been very little progress in the treatment of psychiatric disorders,” said Joseph Gogos, MD, Ph.D., principal investigator at the Zuckerman Institute at Columbia and one of the authors of the ‘article. “MoNNets could be of great help here because they are well suited both for unraveling the biological bases of neurological and neuropsychiatric disorders and for effectively examining hundreds or thousands of possible pharmacological treatments,” added Gogos, who studies schizophrenia.

MoNNets are variations on an established laboratory theme in which researchers grow organoids: three-dimensional renderings of tissues and organs, some as big as a pea, housed in laboratory glassware. To do this, scientists use precursor cells, stem cells, which they can nurture so that they develop into the different types of cells in each organ.

Organoids have proven to be a powerful tool for studying organs such as the heart and liver. When it comes to the brain, however, organoids haven’t quite lived up to the initial hype, Dr. Tomer said, because they have so far lacked the network activity that allows different regions of the tissue real cerebral to communicate.

“MoNNets capture more of this network activity, so we believe they will overcome the limitations of organoids and become better 3D models of brain tissue,” said Dr. Tomer, an assistant professor at Columbia and an affiliate member of the ‘Zuckerman Institute. “With MoNNets, you have individual spheroid modules, each doing their own thing and doing their own calculations, but each module also communicates through the entire system. It’s very cerebral local-global dynamics.”

MoNNets are useful not only for simulating healthy brains, but also for emulating diseased brains. In the new work, the researchers developed MoNNets from mouse brain cells carrying gene variants associated with schizophrenia. The resulting MoNNets exhibited normal local communication between cells within the spheroid modules, but poor coordination of signaling in the overall network of modules.

This lab-dish-disease correspondence suggests that MoNNets, comprising a few million cells, can mimic at least some of the features of cellular and neural circuitry in the brains of patients with schizophrenia comprising tens of billions of cells, Dr. Tomer said. .

These same MoNNets embody another biological signature of brain circuitry in schizophrenia. Their network structures and signaling behaviors are less stable than MoNNets cultured with brain cells lacking schizophrenia genes.

“Circuits and connections were changing and fluctuating,” Dr. Tomer said. “This could help us study short-term memory loss in schizophrenia, in which a similar lack of stable connections might be at play.”

The MoNNets may list another CV item to bolster their candidacy as Petri dish models of schizophrenia: when researchers bathed the MoNNets with drugs known to boost cognitive health in mice genetically engineered to mimic schizophrenia , the cells and circuits of the MoNNets became more stable and exhibited more normal network activity.

“We could acquire data from these different disease models and then use data analysis and machine learning tools to determine what is biologically unique to each of these diseases,” says Dr. Tomer. “In a systematic way, we could model hundreds of genetic mutations associated with these diseases and use MoNNets to discover how different genes specifically affect brain circuitry and health.” According to Dr. Tomer and his colleagues, data like this would likely pave the way for more accurate diagnoses and better treatment choices.

It also has the potential to change the way scientists think about mental illness.

“We have known for a long time, from observations in animal and human brains, that neural circuit deficits are prevalent in a range of psychiatric disorders, even though the genetic bases of these disorders are so varied,” said the Dr. Gogos, who is also a professor of physiology, neuroscience and psychiatry at Columbia’s Vagelos College of Physicians and Surgeons. Rather than characterizing mental illnesses as chemical imbalances in the brain that simply require the right medication to manage, the conceptual framework shifts to mental illness as a circuit disorder, Dr. Gogos said.

“What’s exciting about MoNNets is that they open up versatile new opportunities to model and study these circuit deficits in vitro in a box,” he said.

Jordan Hamm, Ph.D., a neuroscientist at Georgia State University who was not among the authors of the Nature Communication paper, is an early MoNNets fan. His own work on schizophrenia focuses on how the mammalian brain processes sensory information through interactions between local neural circuits and long-range global brain networks.

“MoNNets represent a significant advance in biomedicine and drug discovery tools, particularly for treatments targeting neuronal circuit and network pathologies,” Dr. Hamm said. “These pathologies include some of the most devastating and still undertreated diseases, among them schizophrenia, autism and depression.”

Quote: Researchers study schizophrenia by emulating it in a petri dish (August 8, 2022) Retrieved August 8, 2022 from https://medicalxpress.com/news/2022-08-schizophrenia-emulating-petri-dish.html

Collagen Peptides Market to Reach $1.22 Billion Globally by 2030 at a CAGR of 6.66%: Allied Market Research