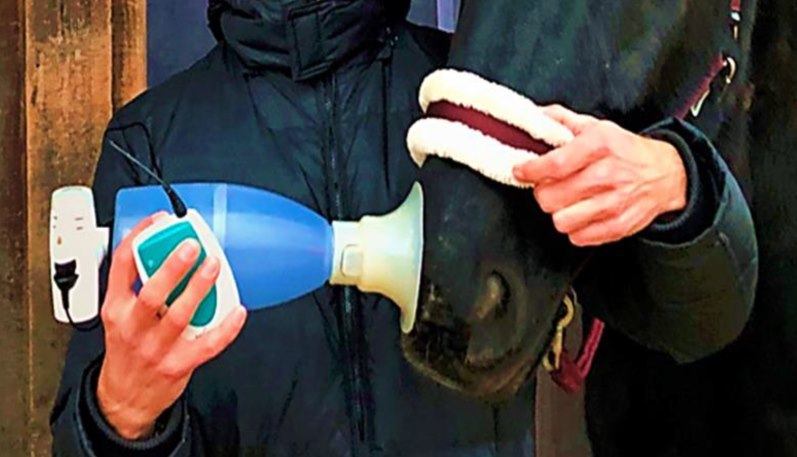 An innovative approach to tackling severe equine asthma shows great promise, the researchers say, even in horses that get limited relief from conventional treatments.

Severe equine asthma is the most common non-infectious respiratory disease in horses, with its mild and moderate form.

The condition, associated with exposure to hay dust and mold spores, bears some similarities to some forms of human asthma and continues to represent a therapeutic problem.

The cornerstone of treatment for severe equine asthma centers on improving conditions to minimize exposure to potentially triggering allergens. Hay may be steamed or soaked (or avoided), stable bedding may be changed, or the affected horse may be moved outside permanently.

Bronchoconstriction can be improved medically by bronchodilators, either inhaled or administered systemically. Finally, expectorants or inhaled saline may be given to improve mucus thinning and transport, and light exercise may also be beneficial.

“Allergen-specific immunotherapy could potentially become an interesting and promising therapeutic approach in the future for certain cases of severe equine allergic asthma,” John Klier and his fellow researchers wrote in the review. Animals.

However, to their knowledge, the current scientific literature includes virtually no reports of allergen-specific immunotherapy as an effective treatment option for severe equine asthma.

This, they said, is likely due to the multifactorial nature of the disease, the different forms of the disease, and the diagnostic limitations of currently commercially available allergy tests.

“The question arises as to whether it is possible to act on the pathophysiology at the immunological level and to prevent or reduce the occurrence of a hypersensitivity reaction.”

The authors, in their just-published review, discussed the tremendous promise of short synthetic single-stranded DNA molecules known as unmethylated cytosine-phosphate-guanine oligodeoxynucleotides (CpG-ODNs). In its unmethylated form, it can boost the immune system.

In mammalian DNA, these molecules in their natural form are quite rare (deleted) and are usually methylated (gated), the authors said.

“The use of synthetic CpG-ODN mimics the effect of a bacterial or viral infection and utilizes the body’s immune system. Thus, CpG-ODN represents great therapeutic potential for allergic diseases.

Research has shown that using gelatin nanoparticles as a molecular transport system can protect CpG-ODN from premature degradation and improve cellular uptake of DNA molecules into immune system target cells.

CpG-ODN, bound to gelatin nanoparticles, has been successfully administered by inhalation to severe equine asthmatic patients in several studies.

These studies demonstrated significant, sustained and allergen-independent improvement over one to eight weeks of key clinical parameters in horses with severe equine asthma, the authors noted. It resulted in improvements in arterial partial pressure of oxygen, amount and viscosity of tracheal mucus, and airway neutrophil inflammatory cells. Immunological parameters also improved.

Of particular note is the relatively low number of inhalations required and the significant improvement sustained over at least eight weeks in the studies for all clinical, endoscopic and cytological parameters examined.

“This nanoparticle immunotherapy is independent of specific allergens,” they said. “In this way, the difficulty of identifying clinically relevant allergens in cases of severe equine asthma can be avoided.”

The authors noted that all horses involved in the field studies remained in their usual housing conditions (home stables) and were examined without any changes to their usual bedding, diet (hay) and exercise in order to accurately test the treatment under natural environmental conditions. .

In conclusion, the authors found that immunotherapy was effective in controlling severe equine asthma, with continued benefit demonstrated in studies over at least eight weeks in horses that had suffered for years from severe equine asthma and were often resistant to conventional therapies. .

“The currently proposed immunotherapy thus opens up new perspectives beyond the conventional therapy consisting of symptomatic treatment with corticosteroids and bronchodilators and the often difficult avoidance of antigens.”

It could also be of interest for the treatment of human asthma, they said.

The study team included Klier, Sebastian Fuchs and Gerhard Winter, all from Ludwig-Maximilians University in Germany; and Heidrun Gehlen, from the Free University of Berlin.

The review, published under a Creative Commons Licensecan be read here.