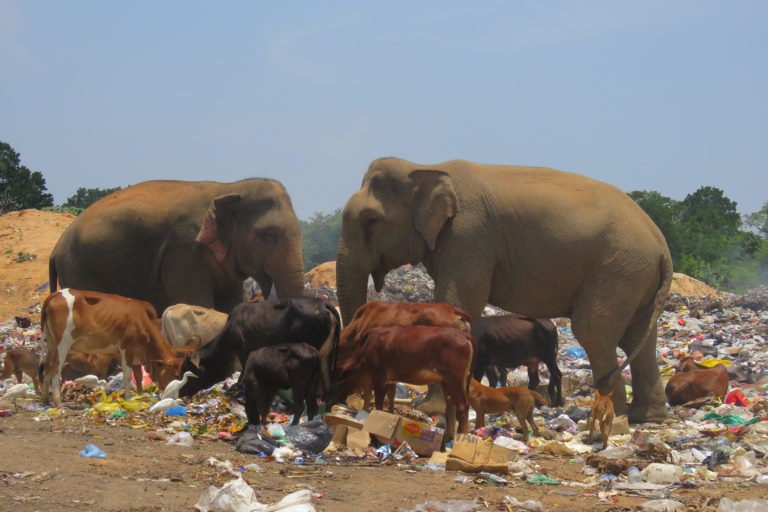 COLOMBO — It took a tweet from Hollywood superstar Leonardo DiCaprio to bring global attention to the issue of trash-eating elephants in Sri Lanka. But local conservationists have long pointed to the problem, which they say is rooted in “short-sighted and politically motivated” planning that continues to wreak havoc on both elephants and humans.

On January 26, Oscar-winning actor and environmentalist DiCaprio tweeted to his nearly 20 million Twitter followers, an Associated Press report on the growing problem of wild Asian elephants (Elephas maximus) dying after feeding in open dumps. Elephants are revered in Sri Lanka and often feature in cultural and religious events. Yet many animals forage alongside stray dogs and crows in these dumps, many of which are located near conservation sites and other protected areas with wildlife.

“We conducted a survey around Sri Lanka and recorded 54 open landfills visited by elephants,” Chandana Sooriyabandara, director general of Sri Lanka’s Department of Wildlife Conservation (DWC), told Mongabay. “The department has nothing to do with setting up these dumps, but eventually we have to deal with it because elephants frequent the dumps. We try to minimize the impact, but it’s a daunting task because 70% Sri Lankan elephants are also found outside protected areas.

While the AP has reported elephants dying after eating plastic waste at the sites, it’s not the plastic itself, mostly polyethylene, says veterinarian Tharaka Prasad, the current director of health at the DWC.

“A number of elephants die every year on these landfills, but the reason for their death is not polythene indigestion, but food poisoning,” Prasad told Mongabay. “A lot of food waste is discarded carelessly. This waste is often sealed tightly inside polythene bags. When food spoils in an oxygen-free environment, bacteria can create toxic substances and we have often found that it is c was the real reason for the death of the garbage-eating elephants.

Ruminants like cows have multiple chambers in their digestive system that can lead to polyethylene buildup in their gut, which can ultimately be fatal. But an elephant’s digestive system is much simpler, and polyethylene passes through when the animal defecates. But plastic is not without its risks, as it can sometimes lead to constipation, Prasad said.

In Sri Lanka, municipal waste is often disposed of in open landfills by local government authorities. Because these sites are unsanitary and foul smelling, local planners try to locate them in areas away from human settlements. This results in the creation of landfill sites in areas frequented by wildlife, including elephants.

“If we take care of the garbage we generate in urban and semi-urban areas where garbage is generated in large quantities, the issue of elephants eating garbage or elephants visiting dumps for food may not arise,” Sumith Pilapitiya, former chief executive of the DWC, told Mongabay. “Rubbish should be disposed of in areas where it is generated and not near nature reserves or areas recognized as habitats for wild animals.”

Pilapitiya said that during his time at the DWC, the department often opposed the creation of new dump sites in and near conservation areas, but was often ignored. He recalled the decision on where to dump waste from Dambulla, a town in the central province, where municipal planners had restricted two potential sites: one in a forest reserve in Digampathana, and the other on the road Dambulla-Matale, a vacant site but dotted with human settlements. Despite objections from the DWC, the planners decided to locate the landfill at Digampathana. Today, around 30 elephants regularly forage there among the rubbish.

The decision also created additional expense for local authorities, who had to install an electric fence around the site to keep elephants out and protect workers and equipment.

“A really short-sighted and politically motivated decision has resulted in the creation of a new problem with the elephants in Digampathana with additional expenses having to be incurred to support this bad decision for the electric fences,” Pilapitiya told Mongabay. “The best and cheapest solution is to avoid creating new problems in environmental management.”

It is extremely rare for elephants to die while feeding in a landfill, says elephant biologist Prithiviraj Fernando of the Center for Conservation and Research (CCRSL).

Fernando, a world authority on the species, who is part of the IUCN’s Asian Elephant Specialist Group, said elephants are very selective foragers in landfills. “If you compare the health status (body condition) of the elephants in the dumps with those found in parks in the same area, those in the dumps are in much better condition,” he told Mongabay. Unless you locate these sites away from elephant habitat, the best thing to do is to sort the garbage, so the elephants can feed separately from the organic waste, he said.

Fernando and his colleagues studied the behavior of elephants in several garbage dumps in southern Sri Lanka. They found that the Uddakandara landfill, located near Yala National Park, is frequented by 26 elephants, and the Wellawaya landfill has about 24 elephants. The team also monitored the now defunct Kataragama landfill, where more than 45 elephants used to feed. They calculated that with an average of 20 elephants feeding in 54 dumps across Sri Lanka, this gives a population of around 1,000 garbage-eating elephants.

The study also revealed that almost all elephants visiting the dumps are bull elephants. Most of them have gunshot wounds, the telltale sign of a crop-ravaging animal that has been shot by farmers. This complicates the question of how to keep elephants out of dumps without pushing them back into farmers’ fields.

“If you close these landfills, these elephants will spend their time at the landfill raiding crops, which will dramatically increase human-elephant conflict, leading to more deaths – of people and elephants,” said Fernando.

He cited the sites of Uddakandara and Kataragama as classic examples of what can happen in such cases. The government has closed the Uddakandara landfill to prevent elephants from feeding in garbage cans. The elephants duly returned to raid the crops, prompting protests from the villagers. Faced with this pressure, the authorities reopened the dump and the elephants went back to eating garbage. It was the same story at Kataragama, Fernando said, except the site remains closed.

“The Kataragama landfill was closed, and after that the human-elephant conflict in the area increased dramatically, as well as an increase in crop raiding,” he said. “People have to invest more in installing electric fences to protect their crops and homes, and elephants and people are getting killed.”

Fernando added that “in a way these landfills actually reduce direct human-elephant conflict. But these dumps need to be better managed.

banner image of elephants feeding in a rubbish dump alongside stray dogs, cattle and egrets, courtesy of the Center for Conservation and Research (CCRSL).

Bridging the gap between science and tradition in soil health