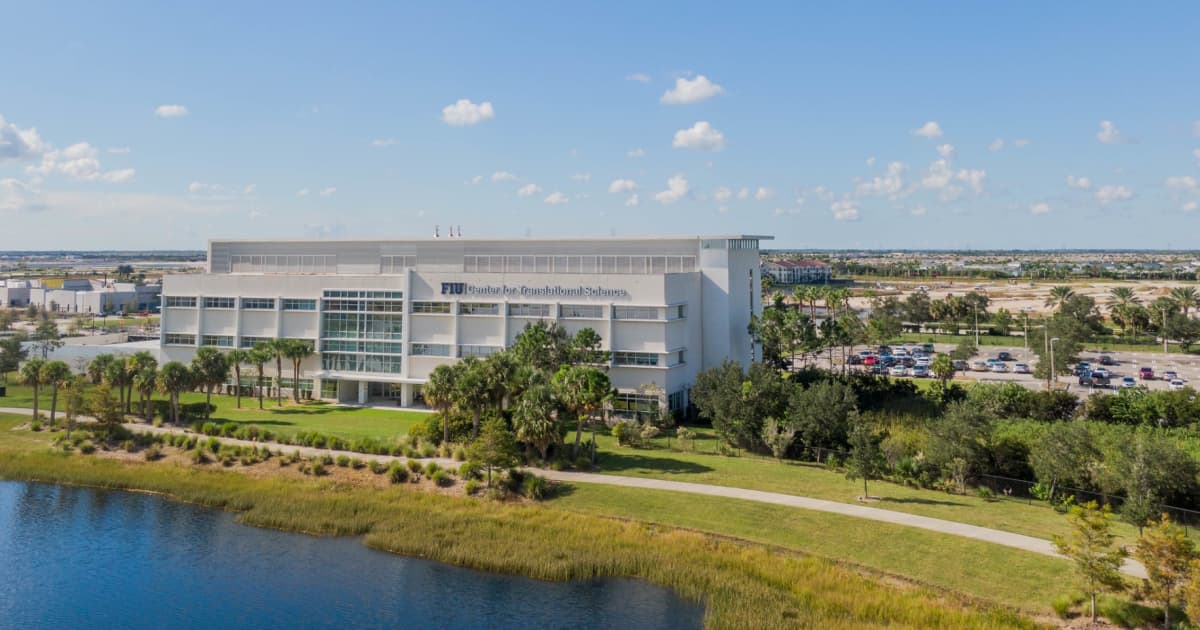 The CRF has strengthened its research capacity with a newly equipped building which completes a dynamic triangle dedicated to investigative medicine. The Center for Translational Science (CTS) is part of a complex in Port St. Lucie, Florida that also includes a separate hospital and research center, both run by the renowned Cleveland Clinic.

A two-hour drive from the university’s main campus, CTS is the natural extension of CRF’s research prowess at a time when broader partnerships have become increasingly important. It represents a tremendous opportunity to work creatively and smarter in support of scientific advancements to make a difference in the lives of patients faster.

The new space lays the foundation for a continuum that begins in the lab and includes cooperation with other institutions as well as with companies that can exploit the resulting discoveries.

â€œGone are the days when someone could work in their lab and do everything under one roof,â€ says Stephen Black, director of the center and most recently professor and head of the translational and regenerative medicine division. at the University of Arizona. â€œThe main thing is to be ready to collaborate. “

Black was hired to take over the Port St. Lucie facility after its previous owner, a pioneering inventor and organic chemist, recognized the CRF’s unique ability to continue ongoing scientific studies while pursuing new ventures. .

The super-rapid deployments of the COVID-19 vaccine are a direct testament to the value of concentrated, inter-laboratory synergy, according to Black and others. They argue that the same strategy must be applied to heal cancer, Alzheimer’s disease, lung disease and more.

â€œThe pipeline for new drugs is empty,â€ says Black. Developing a new pharmaceutical product can take a decade or more, he explains. â€œWe hope to reduce that. So the potential impact on human health care is incredibly high here. “

Brand new laboratories dedicated to brain damage, inflammation and pulmonary vascular disease. The recruitment of experts in the fields of infection / immunity and environmental medicine is underway. The four-storey building will eventually house up to 35 research teams, for a maximum of 300 scientists.

No more turf wars
At the heart of the new approach is a commitment to collaboration between researchers across projects. While secrecy and closed doors once reigned, openness and interactivity now dominate.

Nowhere is this more evident than in the newly created labs themselves, each of which comprises around 5,000 square feet with rows of stations to accommodate multiple research teams and adjacent rooms filled with specialized equipment.

Black deliberately blew up old cramped quarters and individual offices by knocking down walls and creating synergy by bringing together people with common interests. The setup, he says, encourages discussions that can lead to cross-pollination that might otherwise never happen. Excitement and ideas grow in good company, and investigations run more effectively thanks to the contribution of experts from varied backgrounds.

Efforts in Port Saint Lucie complement those taking place at the main CRF campus in areas such as cancer, within the Herbert Wertheim College of Medicine, and Environmental Toxicology, within the Robert Stempel College of Public Health and Social Work. Most of the researchers working at CTS hold positions there, and TomÃ¡s R. Guilarte, environmental neuroscientist and dean of Stempel College, sees limitless potential for productive connections.

The promise of cooperative efforts encouraged Xugang Xia, a qualified physician and respected neuroscientist with several patents and documents to his credit, to join CTS. The seasoned researcher understands the challenges of helping to start a business of this scale, “but there are also many opportunities,” he adds, regarding the transition to a new environment. The first of these: bringing people together on the front lines.

Look out
The same tactic of putting scientists side by side in the lab explains how the CRF works with outside partners, such as the Cleveland Clinic, with a hospital and research institute each within walking distance of the CTS. The three facilities share the common goal of saving lives through breakthrough discoveries and innovations.

Michaela Gack, virologist and scientific director of the Cleveland Clinic Florida Research and Innovation Center (FRIC), which officially opened in 2020, sees the value in sharing what she calls “additional infrastructure and basic facilities. It plans, for example, to give CRF researchers access to spaces such as the FRIC’s high-containment biological laboratory – a state-of-the-art facility in which infectious viral agents can be studied – and to the “biobank” tissue samples being established.

Already, researchers from the two institutions have met and, in one case, jointly submitted an NIH grant, the first in a long series to come, Gack says. It unreservedly promotes mutually beneficial relationships in the interest of science.

â€œCleveland Clinic really has a knack for making this work,â€ she says. “This [approach] could really benefit not only the FIU and us, but, frankly, the whole region. “

And essential for getting to the other end of the translational science spectrum in a timely manner – effective delivery of life-impacting therapies – The FIU is encouraged to work with business partners. While funding for basic research comes mainly from the National Institutes of Health – expectations are that total grants for work at CTS will reach between $ 45-50 million per year by fiscal year 2026 – get in human trials usually requires an injection of private capital.

â€œThere has to be research-oriented commercialization,â€ says Ronald J. Shebuski, president and CEO of Patmos Therapeutics, a Florida-based biotech startup, to continue scientific research to a consequent end. “It is essential that there is a medical reason why you are doing it.

A former senior scientist at Merck, former director of what is now Pfizer and a two-term former advisor to the FDA’s Center for Drug Evaluation, Shebuski understands well the current pharmaceutical gaps and the millions of dollars needed to fill them.

Acknowledging the high level work coming out of Black’s lab in particular – Shebuski is very excited about the promising identification of new molecular “targets” involved in respiratory disease and for which drugs can be developed – he and the researcher of the CRF together obtained an NIH Small Business Technology Transfer Grant to fund tests to validate the research. Once the latter is finished, Shebuski may seek investors to propel FIU’s patented discoveries through human trials and the regulatory process to market, eventually.

Take a long-term view
As the FIU is best aware, building human infrastructure remains even more important to long-term success than acquiring new buildings. The education of the rising generation of researchers is crucial to ensure the realization of future projects. These young researchers include people like post-doctoral associate Alejandro Garcia Flores, who is working in Black’s lab on several studies related to lung disease, including one on ventilator-induced lung injury. (This latter work began before the pandemic but, for obvious reasons, has grown in importance since.)

â€œThis is a very exciting growth opportunity for me,â€ says Garcia, who marvels at the seamless integration between the teams that Black has facilitated. “If we have an idea of â€‹â€‹experience, we can immediately discuss it with others, especially if this is the first time I’ve done a certain [procedure]He said, giving examples of tests that might require a particular type of analysis. â€œWe don’t have to contact a remote location that specializes in this area,â€ Garcia adds. Instead, he looks for his sources within the CTS to ask, â€œWhat do you think? What are the [necessary] conditions? “

The opportunities extend to those who are even earlier in their careers, like Tasleem Robinson, who in 2019 graduated with a bachelor’s degree in biology and returned home to Port St. Lucie to decide on her next move. Working as a research assistant at CTS, she is mentored by seasoned researchers even as she plans to apply to the CRF for a doctorate. program.

“I’m just looking to learn as much as possible,” says Robinson, whose job it is to detect the presence and size of specific protein molecules associated with acute lung injury, “and play a critical role in that research.”

While Black and the others at CTS enjoy synergies that enable a once-unheard of pace in the research world, he remains steadfast in his commitment to the old-fashioned concept of integrity. This is the foundation upon which everything else rests.

â€œIt is an honor to be entrusted with these resources,â€ he says of the many moving elements that together constitute a brave new world in the scientific exploration of the university.

â€œI am thinking of the inheritanceâ€, continues the molecular biologist by training. â€œSo I can leave a dynamic research environment and hopefully have trained more people capable of pursuing this vision. My goal is to recruit people smarter than me, smart people who can interact. And I think if we can do that, we will be very successful. “

What is lymphedema? Fox Chase Cancer Center on how to diagnose and treat disease that occurs after cancer surgery

Patient testimonials are unethical and should be banned