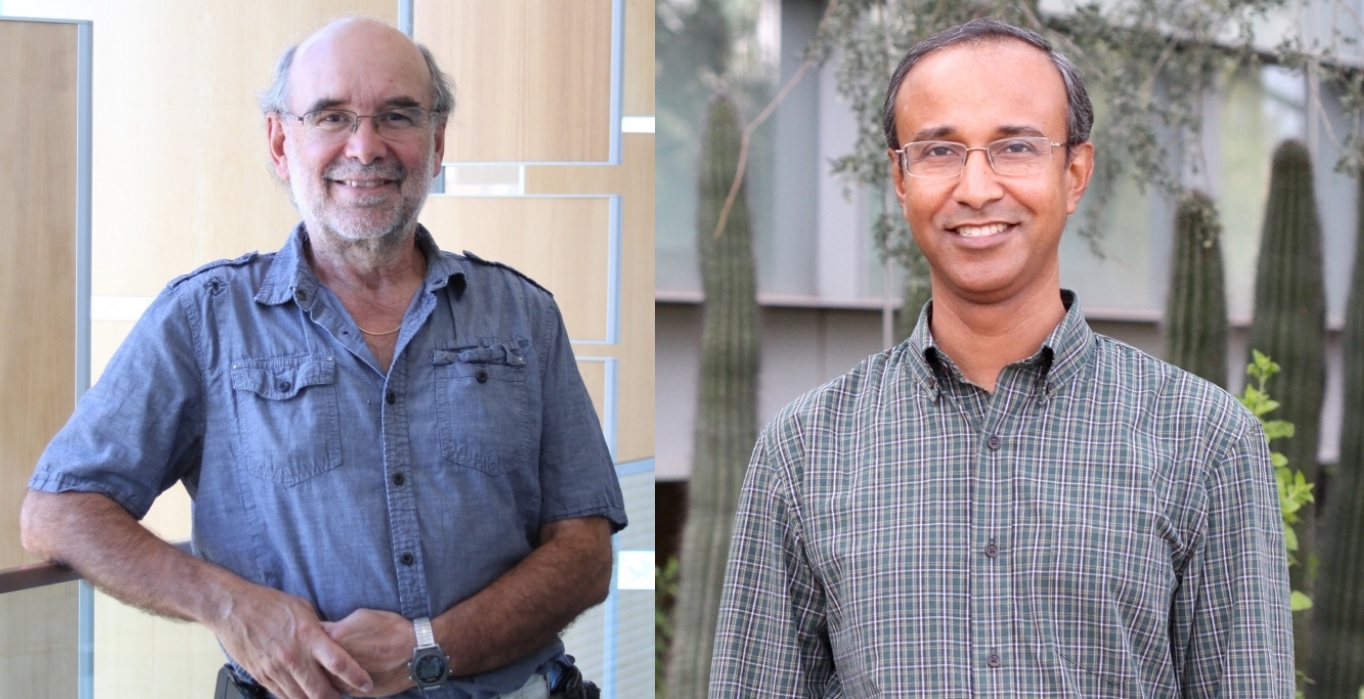 With the world still in the throes of a devastating pandemic, it’s hard to imagine viruses as anything other than hostile enemies to be defeated.

But in a recent review article for the journal Cancers, Masmudur Rahman and Grant McFadden describe a class of viruses that work to fight rather than cause fatal disease. These oncolytic viruses, as they are called, have a remarkable ability to target and destroy cancer cells while leaving healthy cells intact.

Researchers at the Biodesign Center for Immunotherapy, Vaccines and Virotherapy Grant McFadden (left) and Masmudur Rahman.

Rahman is a researcher at the Biodesign Center for Immunotherapy, Vaccines and Virotherapy. McFadden, a pioneer in the field of oncolytic viruses, heads the center.

By far, viruses are the most abundant biological entities on Earth, easily surpassing all other life forms combined, despite inhabiting a dark world somewhere between living and inanimate matter.

Viruses infect all forms of cellular life, including animals, plants, bacteria, and fungi. Although they are known to cause serious disease, they also play a vital role in the evolution of ecosystems – phenomena that scientists are only beginning to appreciate.

Viruses can be roughly divided into â€œspecialists,â€ who are selective about the particular organisms they infect, and â€œgeneralists,â€ who are more open to the species they target and invade. Oncolytic viruses lean towards the specialist category. Although they pose little or no danger to normal mammalian cells, they can be fierce killers of malignant cells associated with cancer.

Cancer remains one of the leading causes of death worldwide and is expected to cause 1.9 million cases and 608,570 deaths in 2021 in the United States alone, according to the American Cancer Society. The discovery of carcinogenic or oncolytic viruses has opened a new door to cancer therapies that can achieve the elusive goal of eradicating cancer while leaving healthy cells and tissues unharmed.

Some of the main benefits of oncolytic viruses as well as strategies to improve them are illustrated below. 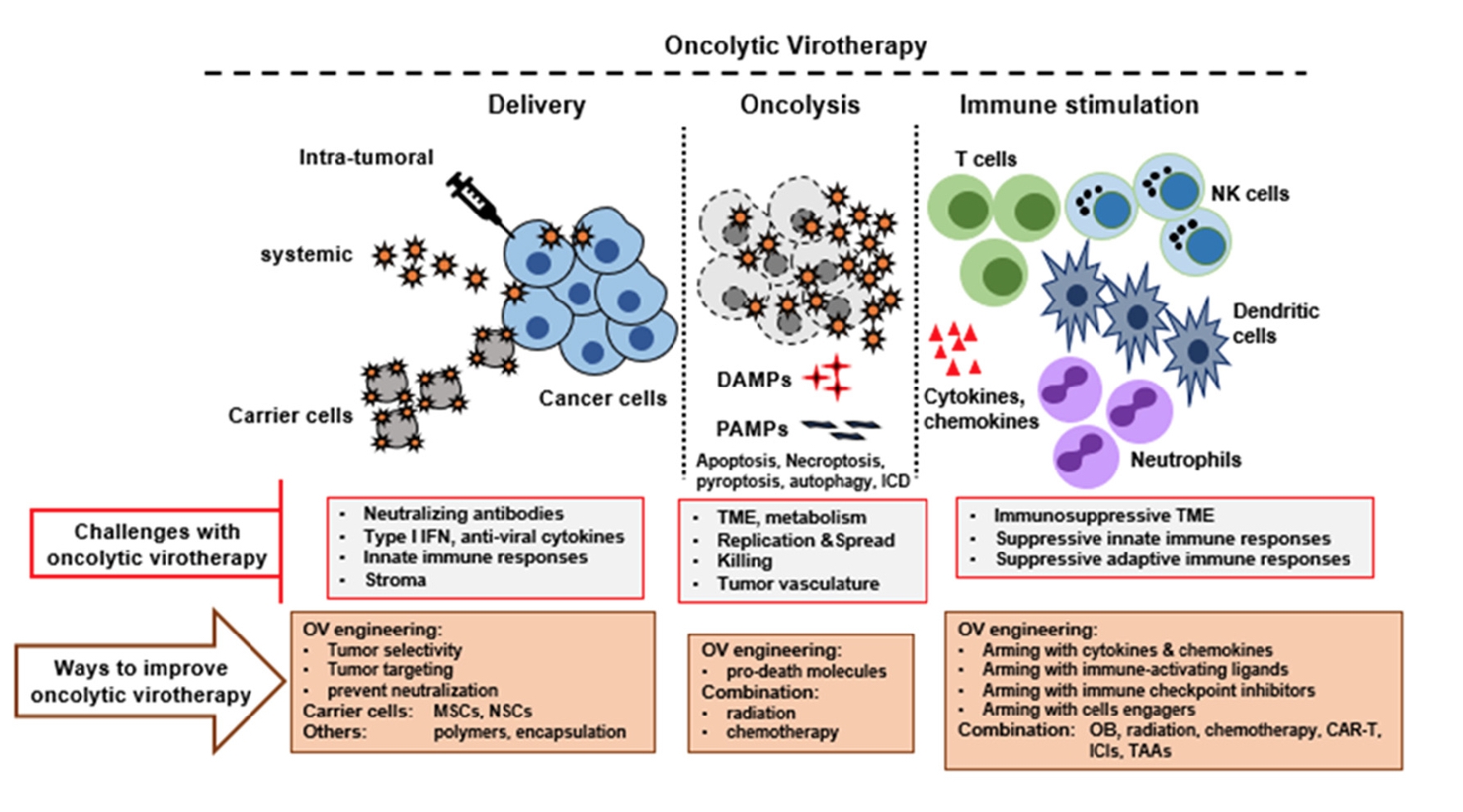 This graphic describes the process of introducing oncolytic (cancer-killing) viruses. They can be injected directly into tumors or transported to the affected site with carrier cells. Viruses then begin to attack and kill cancer cells and trigger cell suicide processes like apoptosis and necroptosis. Oncolytic viruses then work to stimulate various cells of the immune system, alerting them to the presence of viral invaders, as well as cancer, and helping them overcome the cancer’s ability to suppress immune activity. The graph also shows a number of tactics to improve oncolytic viruses. Graphic courtesy of Cancers magazine

The first clues that oncolytic viruses can exist in nature came over a century ago, when doctors noticed that some cancers seemed to be receding in patients who also had microbial infections. For example, towards the end of the 19th century, it was reported that a patient with leukemia was regressing under the influence of influenza-like illness accompanied by inflammation, directly involving viruses as anti-cancer entities. .

Today, a variety of oncolytic viruses are being explored for the treatment of cancer. While many viruses of this type can directly attack and kill malignant cells, their main strength may lie in their ability to alert an inactive or disabled immune system to the presence of cancer.

If successful, the oncolytic virus prompts the patient’s own cellular sentinel dogs of immunity to seek out and destroy cancer, just as they would with a foreign pathogen.

Researchers like McFadden and Rahman have learned to redesign oncolytic viruses to refine their lethality to cancer cells as well as their ability to stimulate the immune system. Two main methods are used in such viral gene engineering, known as knock-out and knock-in approaches.

Knockout refers to the removal of viral genes, before introducing the virus into patients. Knock-in methods involve the introduction of new genes, called transgenes, into naturally occurring oncolytic viruses.

At the Biodesign Center, McFadden, Rahman and their colleagues are working with the myxoma virus, a very promising oncolytic virus. Myxoma is one of a large family of viruses known as the poxviruses. Myxoma is not pathogenic to humans, but it is almost 100% fatal to European rabbits, producing an aggressive disease known as myxomatosis. When introduced into a bed of cancer cells, the myxoma attacks and kills them. Yet the virus is harmless to non-cancerous human cells (or those of any species other than rabbits).

Myxoma is a double-stranded DNA poxvirus. Like most of the other viruses in this large group of viruses, it has a relatively large genome, made up of over 160,000 genetic base pairs, which encode 171 viral genes.

One of the reasons myxoma is an attractive candidate for oncolytic virotherapy is that its large genome lends itself to improvements using genetic modification. Alterations involving transgenes may further enhance the ability of oncolytic viruses to recruit immune system cells to recognize and target tumor, turning hidden or “immune-cold” cancers into “immune-hot” cancers vulnerable to destruction.

One of the challenges of oncolytic virotherapy is getting the viruses to the affected cancerous area. In some cases, the viruses can be injected directly into the site of the cancer. But for cancers hidden in organs or tissues of the body, viruses must be escorted through the bloodstream to the appropriate site. This can be accomplished by using carrier cells to transport the virus to cancer.

The full potential of oncolytic viruses will almost certainly lie in combining them with existing cancer treatments such as radiation therapy, chemotherapy and various forms of immunotherapy. One of the most promising new treatments is a form of immunotherapy using checkpoint inhibitors.

â€œWhen patients react to checkpoint inhibitors, it is often like magic,â€ says McFadden. “They can undergo massive tumor regression and long-term disease-free survival.”

Rahman agrees, with a caveat: â€œNew approaches such as immune checkpoint inhibitors are very effective in reducing tumor burden and improving survival, but they only work in a small number of patients – only 10 to 20%. “

Describing the mysterious disparity between responders and non-responders, the authors suggest that patients whose cancer responds to the drug may have mounted an initial immune response to the cancer that was suppressed. In these cases, removing the suppression with checkpoint inhibitors can reactivate the immune system to do its job.

â€œWe believe that if you get an infection in the tumor bed, you can generate a new type of immune response to both the tumor and the virus,â€ McFadden said. “This new immune response will hopefully allow more patients to benefit from immunotherapies such as checkpoint inhibitors.”

While only four oncolytic viruses have so far been approved for global use, many more, including myxoma, are in preclinical testing as the field rapidly progresses. McFadden formed the company OncoMyx Therapeutics to advance the potential for fighting myxoma cancer in clinical trials.

Living robots made in the lab have found a new way to self-replicate, researchers say