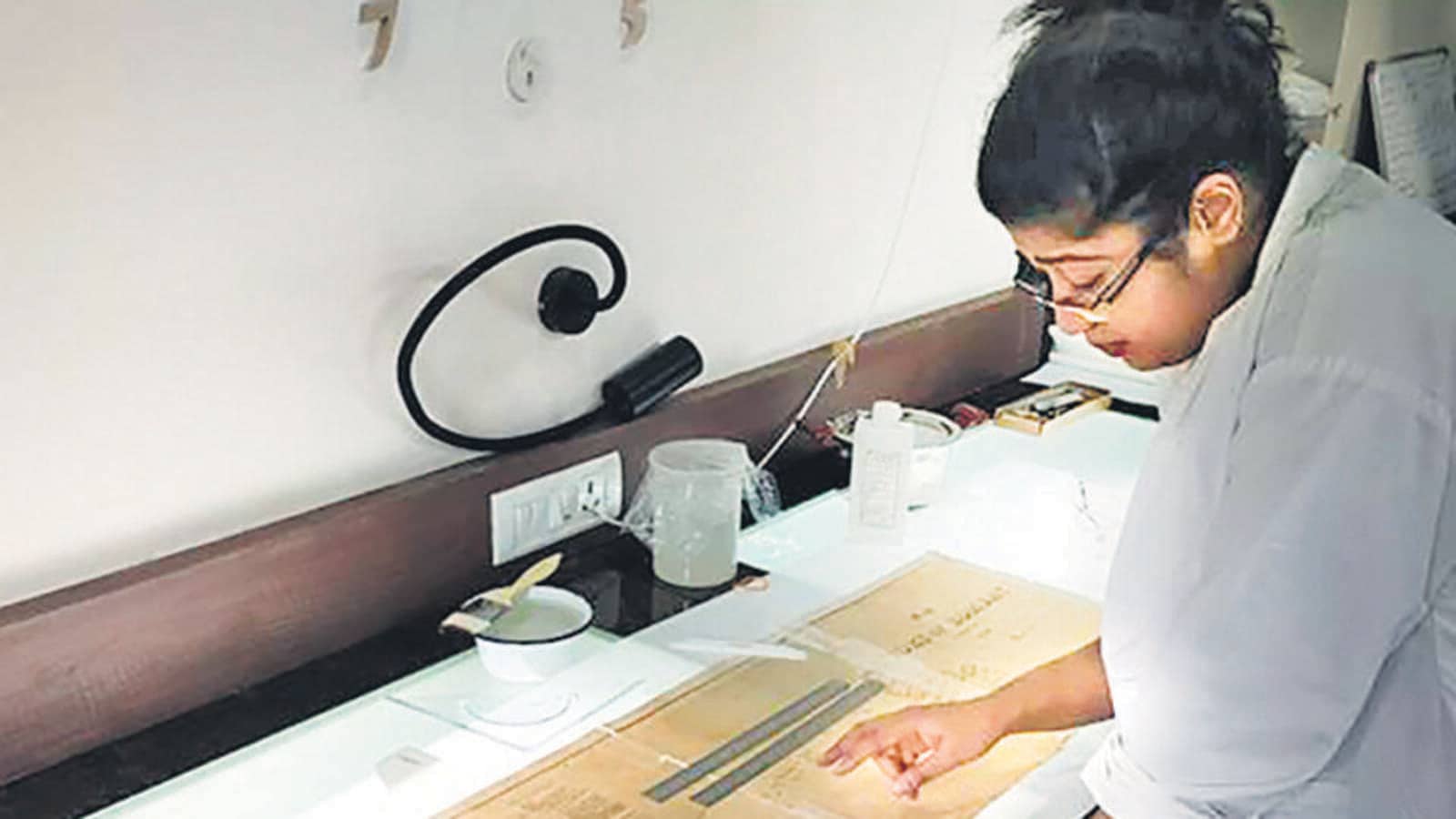 Mumbai: In his “Report on the Sanitary Condition and Sanitary Requirements of Bombay” of 1852, British engineer Henry Conybeare, who designed the city’s first water supply system from Lake Vihar, lamented the absence of “unity and system” in the “indigenous” parts. from the city and the virtual absence of drains and sewers. “Our city of half a million people is not divided (as it should be for half a dozen civic and health purposes) into generally recognized districts and subdivisions,” writes- he in the report, and attributes the higher mortality in these parts to unsanitary conditions.

Conybeare, who was Superintendent of Reparations for Bombay at the time, also mapped the colonial city – ‘Map of the Hometown of Bombay’ showed the bunds and water reservoirs that supplied the areas extending from the market (behind the fort walls) at Kamathipura (spelled “Coomatteepoora”); and the “Map of Fort Bombay” showed the well-planned streets lined with houses of the “educated and influential classes”.

These two maps, completed in 1855, have recently been restored and are part of an exhibition open to the public on Saturday. Thirty-two maps from the collection of the Asiatic Society of Mumbai will be on display for a month in the Durbar Hall of the Asiatic Library. This includes one from 1652 made by Nicolas Sanson D’abbeville, the French royal cartographer, who mapped the Mughal Empire, a map from the Great Trigometric Survey (which began in 1802 and was carried out until the 1870s) showing the valley of Chamba, as well as a 7.5 foot long map of the province of Punjab and Sindh dating from 1867. There are six which show Mumbai, including a 1710 pictorial view of the English fort in Bombay as well as an 1896 map which detailed the various districts of the city and its hospitals during the plague epidemic.

The maps were restored with funds arranged through the Rotary Club of Mumbai by freelance newspaper and book conservator Amalina Dave, who launched a restoration project on 100 maps from the collection in 2019.

“We have a very large collection of cards, it’s more than a thousand. We had to be very selective for this exhibition. This gives you an idea of ​​how the cartographers, who did not have the type of instrumentation that the current ones have, prepared these maps based on what travelers told them and what they were able to discover on the country and its coastline. They are like works of art,” said Vispi Balaporia, president of the Asiatic Society of Mumbai.

The Changing Idea of ​​India

For Deepti Anand and Sanghamitra Chatterjee, co-founders of the heritage management company Past Perfect and curators of the exhibition, the research raised many frames of reference, and they wanted to go beyond the obvious: the cartography as a colonial tool. Anand and Chatterjee were more interested in what the mapmaker was looking to depict (and omit) on the map, as well as Dave’s journey as a curator.

“We just knew that was the story we had to tell,” Anand said. Accordingly, each exhibit has a curator’s note, as well as a card titled “The ‘Conservation’ Conversation”, detailing Dave’s techniques and discoveries that were unique to the exhibit.

“The exhibit shows how map making as an exercise itself has changed,” Chatterjee said, giving the example of Sanson’s 1652 map of the Mughal Empire. “I call this map ‘brain-shaped India,'” Anand said, accurately describing the shape the 17th-century French cartographer gave to the Indian emperor’s borders. “Although these were geographically inaccurate, they were called accurate and were considered a reference in travelogues of the time,” Anand said. Moreover, Sanson’s assignment to map the lay of the land was due to the fact that the French Emperor wanted to understand the trading outpost that other European countries like the Portuguese and the Dutch had already reached.

It is in James Rennel’s “Map of Hindustan” (dated 1788) that we begin to see the emergence of India as we know it today. Rivers, plateaus, villages are all visible in great detail: Rennel, who served as Surveyor General of Bengal for the East India Company, in fact produced some of the most accurate maps of the subcontinent.

“As you go into the 19th century, the details change. The Great Trignometrical Survey maps show a higher level of accuracy as a more modern scientific approach has begun to be used in creating the maps,” Chatterjee said.

“Through these 32 maps, the idea of ​​India as a landmass emerges. Some of the cartographers of the 17th and 18th centuries produced maps so that Europeans could vicariously discover the Orient, which was relatively unknown territory. In the 19th century, maps began to be used for colonial documentation and study,” Anand added.

Dave’s association with the Asiatic Library began in 2017, when it proposed a pilot restoration project on a smaller scale: new materials, new techniques and a process to repair books without taking them apart.

A few years later, the Rotary Club of Mumbai was keen to launch a map restoration project. Dave previewed the project in 2019. However, with the pandemic-induced lockdowns, the goals and timelines were changed. New equipment has also been added to the Asian Library’s existing Restoration Lab, including a low-pressure table to facilitate cleaning and flattening of paper, with a humidification chamber to relax the fibers of brittle, wrinkled or folded paper. .

The weather played a big role in Dave’s decision on how to approach the restoration. A very humid environment like Mumbai, especially during the monsoon, affected even the tiniest choices – like the type of adhesive used – that Dave made. “What we don’t realize is that there is no single recipe that will work in all settings. It’s all about understanding the environment in that building and in that city, and then finding a solution that works.

She took Conybeare’s Fort de Bombay map as an example. “When I received the card for processing, it was covered on both sides with Japanese fabric, and there were actually two things that happened. The fabric kept it from falling apart and the pieces from falling apart. However, the cloth also hid some of the damage, for example you couldn’t see that the map was in four pieces, nor could you see that there were multiple fragments of the map. restoration, I had to collect these fragments and reattach them to the map.

Describing the restoration process, Dave said: “Since the card was so fragile, I didn’t want to expose it to water. So I did a method of dry cleaning, or surface cleaning, which involved rubbing a vulcanized rubber sponge over the surface of the card, which picks up dirt and can also brush off anything it picks up. After that, I did non-aqueous deacidification, which also didn’t involve water. All adhesives used on the card were alcohol based. This helped mitigate the negative effects of water on the map, such as wrinkling or crinkling. »

Dave also made sure that most of the processing on the card – using cotton crinoline and Japanese paper, and alcohol-based adhesives – was done on the back of the card and not the front, so that elaborate details are not obscured. On the front of the card, Dave stuck strips of fabric over the cracks to make sure the alignment of the card didn’t shift. After mending the back, she removed those strips (“it’s quite simple, just reactivate the glue and peel them off”). The last step was to put all the little pieces of paper that fell back into place on the map.

“The very last step is to find out where each of these items belong and then tap them to make sure they are properly integrated into the map. This is very risky because these small pieces are the easiest to lose.

The philosophy of conservation

Unlike an oil painting where restoration involves renovating or repairing to return the work to its original, Dave’s approach to these maps was decidedly different. In many, the paper was extremely fragile and brittle, so the strategies differed. “If I were to be completely abstract, the object would tell me [how to work on it]. I couldn’t come in with 100% certainty what I was going to do,” Dave said. Still, there were certain principles she stuck to.

The first, says Dave, is the Hippocratic oath: you do no harm.

The second is the principle of reversibility. “Everything I do on a card has to be reversible. Thirty years from now…a restorer should be able to undo the work I’ve done. Years later, if a restorer with new techniques wants to redo a map, no damage will be caused to him by what I have done.

Third, conservation must be conservative. “The interventions when you take corrective action for an object should be as minimal as possible, because the most important thing is the object. You want to see it as it was intended. I approach it by letting myself see what I can do to preserve that intent. It’s about balancing the intent of the original object with what’s possible, practical, and will ensure longevity.

Dotsure Fights for Innovation in Veterinary Science, Some Breakthrough Findings