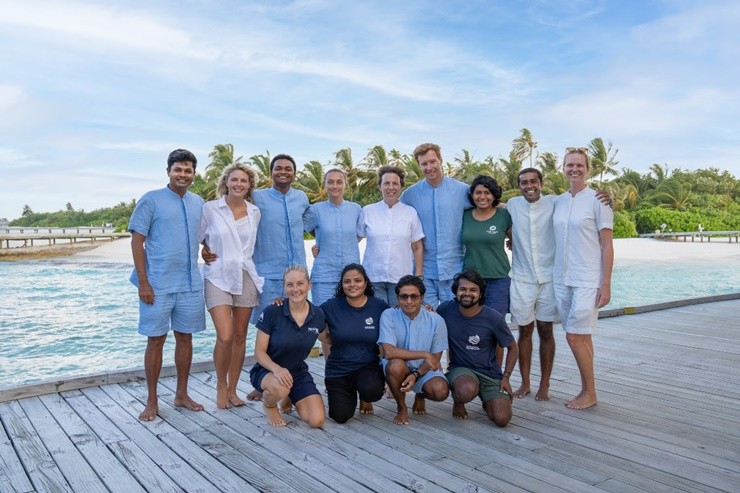 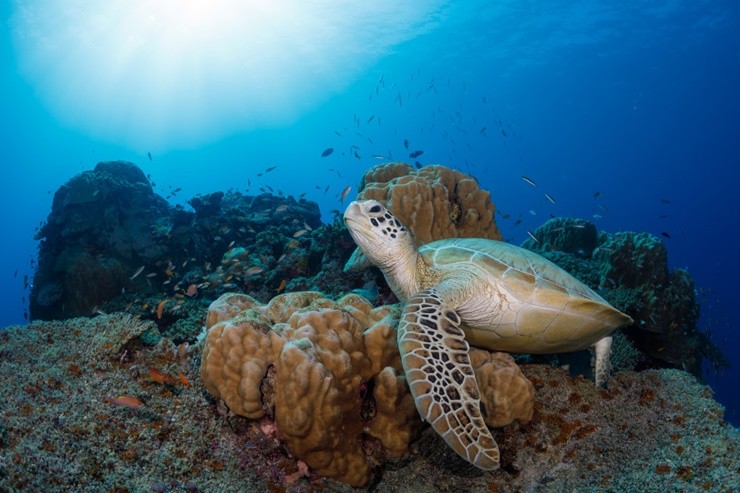 A green sea turtle spotted near L. Gaadhoo. It is the most important nesting site for green turtles in the Maldives and is now a marine protected area. 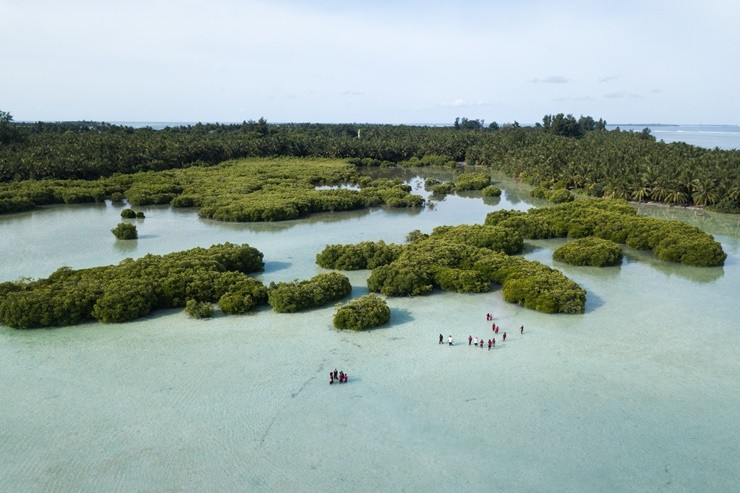 The MUI team is on an excursion with a local school through the L. Hithadhoo mangrove, which has also been declared a marine protected area.

The announcement comes just two months after the atoll was declared a Hope Spot by Mission Blue.

Recognition of progress in conservation
MUI, the Six Senses Laamu marine biology team, made up of guests from the resort and its three partner NGOs: The Manta Trust, Blue Marine Foundation and The Olive Ridley Project, was named the marine and coastal category winner at the 2021 Skål International Sustainable Tourism Awards. This is the second Skål trophy presented at Six Senses Laamu after the resort was crowned winner of the same category in 2018. Three experts Sustainability Independents judged 50 entries from 26 countries, placing MUI at the top of its category ahead of five other projects.

“Receiving this award twice is an incredible achievement“, Explain Marteyne van Well, General Manager of Six Senses Laamu, “and it’s a testament to the progress MUI has made in marine conservation since we won our first Skål award three years ago.”

This award celebrates the team’s dedication to marine conservation through their work in research, education and community outreach. Their research has been presented at both scientific symposia and government meetings to drive policy change. They provided 199 Laamu children with marine conservation and environmental education and took 566 students from local schools on snorkeling trips. Since 2019, they have had 26,000 educational moments with guests and certified 165 children in their junior marine biology program.

Six designated marine protected areas
Just a day after the award was announced, MUI celebrations continued when the President of the Maldives, Mr. Ibrahim Mohamed Solih, announced that six MPAs would come to Laamu. The team has been working on this step for many years.

“Since MUI’s inception, our ultimate goal has been to protect Laamu’s marine habitats and key megafauna species through legislation.,” said Philippa Roe, Chief Marine Biologist of the MUI. “For years, the partners within MUI – Six Senses Laamu, the Manta Trust, Blue Marine Foundation and the Olive Ridley Project – have collected research on Laamu’s marine ecosystems and species, much of which has been used as evidence to support marine protection..”

“The new MPAs, comprised of interconnected coral reefs, mangroves and seagrass beds, will support the Laamu community by protecting fish populations and livelihoods while maintaining climate-resilient reefs“, Explain Shaha Hashim, the Maldives project manager for Blue Marine Foundation and a driving force behind the designation of MPAs.

Welcome to Regenerative Travel Activism
The Skål award wasn’t the only award received at Laamu last month. On December 15, 2021, the winners of the Regenerative Travel 2021 Impact Awards were announced and Shaha was recognized as the Regenerative Activist of the Year. The award recognizes her dedication to these MPA designations by describing her as “a voice for many who do not have the capacity or the platform to speak, working towards equitable and well-managed resources based on scientific evidence.”

Now that these MPAs have been designated, the Ministry of Environment will work with stakeholders, including atoll and island councils, to develop management plans for each area. MUI and the Blue Marine Foundation will continue to work with local community members and leaders on the atoll, providing advice and assistance where needed.

The Self-Care Treatment Everyone Gets and Where: Diamond Glow Facial