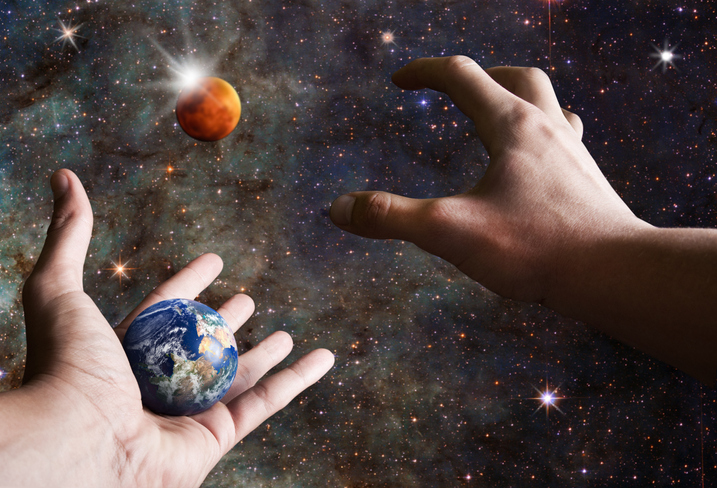 In other words, NASA said: “Food as well as other supplies will most likely need to be pre-positioned ​[ie. sent in advance of the human cargo], waiting for their arrival, so the shelf life becomes a huge challenge.​

“Right now, with current propulsion technology, ​[it’s] six months to Mars, and… 18 months between possible launches. A round-trip mission to Mars will last almost three years, so adding the time needed to produce, package, launch and pre-position the food, the food the crew eats during the six-month return flight will be at least five years old… and maybe more.​

Packaging waste: “How are you going to use it, reuse it or even throw it away?”​

Panelist Dr Michelle Perchonok (now retired), who spent 17 years working at NASA’s Johnson Space Center as the Human Research Program Manager, explained: “Developing a food system for a mission to Mars must be safe, nutritious, acceptable and not use too many vehicle resources. So it’s power, volume, mass and crew time.​

“If we had the International Space Station food system, the packaged food system, to feed a crew of six for three years on a mission to Mars, it would take over 12,000 kilograms of food or over 26,000 pounds of food, including 17% or so. 4,500 pounds is packaging waste. What are you gonna do with that? How are you going to use it to reuse it? How can you even throw it away? So things have to change. »​

She added: “The food is going to be pre-positioned​ [sent to Mars in advance of the human cargo], because it is impossible for a vehicle to carry everything at once, so they will carry six months’ worth of food for the crew. But are we sure it won’t be damaged when it hits the ground?​

The Deep Space Challengea collaboration between NASA’s Centennial Challenges program and the Canadian Space Agency, has identified a set of technologies that could be deployed on a mission to Mars, including:

Learn more about some of the technologies HERE.

NASA is currently exploring several strategies for feeding crews on Mars missions, from technologies to extend the shelf life of existing packaged foods, to new approaches to producing food during the mission using microbes ranging from algae to fungi. , the cultivation of mammalian cells to make cultured meat. He also seeks to collect ideas from startups through his Centennial Challenge Programwhich includes the Deep space food challenge collaboration with the Canadian Space Agency.

The microbiome in space: “Can we colonize astronauts with microbes that can protect them against risks such as mental health risks or radiation damage?”​

One of these startups is based in Massachusetts Holobiomewhich has created one of the world’s largest collections of human gut microbes and recently teamed up with Unilever to discover ingredients that target the gut-brain axis.

Holobiome Founder and CEO Dr. Phil Strandwitz says understanding how to harness the billions of bacteria that populate our bodies to optimize astronaut health on long-haul missions is an exciting new area of ​​research for the company. .

“We have built a donor network of about 9,000 people who poop for us on demand… We then take the samples, isolate very large panels of human gut bacteria, and systematically screen for the influence of these microbes on biology. ​[in a way] that we think are important for health and disease. ​

“The end goal is can we have the next generation of probiotics? Can we have smarter food? Can a disease be cured rather than cured? And then can we actually colonize astronauts with microbes that can protect them from things like mental health risks or radiation damage? »​

He noted that there is “significant evidence that suggests microbes in the gut”​ may be involved in depression, with foods and medications both potentially impacting this gut/brain axis.

Regarding drugs, he said: “There is an increased risk of developing depressive behavior if you take antibiotics, but not with antivirals and antifungals. This suggests that it’s not just an infection associated with increased risk, it could actually be what’s being killed by these antibiotics. ​[ie gut bacteria].

“It’s been done almost a dozen times at this point where you can take communities of microbes from people with depression, put them into rodents, and actually transmit depression-like behavior. But if you take a microbiome from healthy people and run the same experiment, you don’t get that transmission, so it’s really amazing.​

“So we did a project with TRISH (Translational Research Institute for Space Health)​ by looking at two mechanisms where there’s good evidence that they’re linked to depression, we found microbes that hit those mechanisms in a potentially therapeutic way, and that led us to have a single strain of bacteria that, according to us, could possibly help fight things like depression. ”​

“Why not have a little briefcase – maybe inside us – of the microbes of humanity?”​

He predicted: “A map of how human microbes influence our biology will be made in 10 years with the technology we have. The next piece will be an atlas of this ready-to-use functional potential. So I’m talking about large panels of microbes that you can send on a mission to Mars, maybe even among the astronauts…and you can isolate them later. ​

“These microbes can produce vitamins, you can engineer them to produce drugs, or use them to increase yield and plant growth. So why not have a little briefcase – maybe inside of us – of the microbes of humanity that we’ve evolved with for so long, to enable health, to enable food, to enable colonization of Mars ? »​

Dr Dorit Donoviel, Executive Director of TRISH, added: “Bob Langer at MIT​​​ has developed a pill you can swallow that can release germs over a six-month period.​

As for the radiation, to which astronauts will be exposed during a long mission, she said, “At my previous institute, we did a radiation study and looked at the microbes in the gut and there was a change in the types of microbes in mice that were exposed to an equivalent of space radiation, and they went to a less friendly form of microbes under these conditions.​

Kitchen: “You can’t have open flames in space”​

Reminding delegates that cooking is very different in zero gravity -“You​ can’t have open flames in space” – Former astronaut Scott Parazynski said the current food options for astronauts are “similar to a camping trip“, adding:”So maybe there’s a can of chicken that you put in a convection oven and heat it up. Or a bag of potatoes au gratin; it must be dehydrated and shrunk because weight is paramount.​

He also noted that spicy foods are popular in space because astronauts’ sensory systems can be muted. “When we go up in space, there is a fluid change that takes place. So here on Earth we have fluids building up in our lower body and when we ascend through space in zero gravity we initially get a puffy face and that affects our taste buds. And so we tend to like spicier foods.​

Dr. Michelle Perchonok added: “Now on the International Space Station there are currently over 200 foods, but that includes drinks, so there are probably only around 140 different foods, so things can get pretty boring. food doesn’t always look good, but at least let’s give it a taste, so for sensory ratings, on a nine-point hedonic scale, if the food doesn’t score a six or more , he does not get ​[approved].”

Tomatoes removing more carbon dioxide from the air and growing food on the lunar regolith?​

Dr Donoviel said she was particularly enthusiastic about ‘space tomatoes’ – small tomato plants that have been genetically modified to remove more carbon dioxide from the air, while Dr Perchonok said that 3D printing was very promising. “If we put vitamins in a very dense​ [3D-printed] food matrix, maybe we can keep them stable for longer.​

But what about growing food on the surface of the Moon or on Mars?

According to Parazynski, “There have been experienceslook at the lunar regolith and grow food there. It can actually support root systems and grow well provided there is light and things of that nature. Obviously, hydroponics in the absence of soil is also possible.​