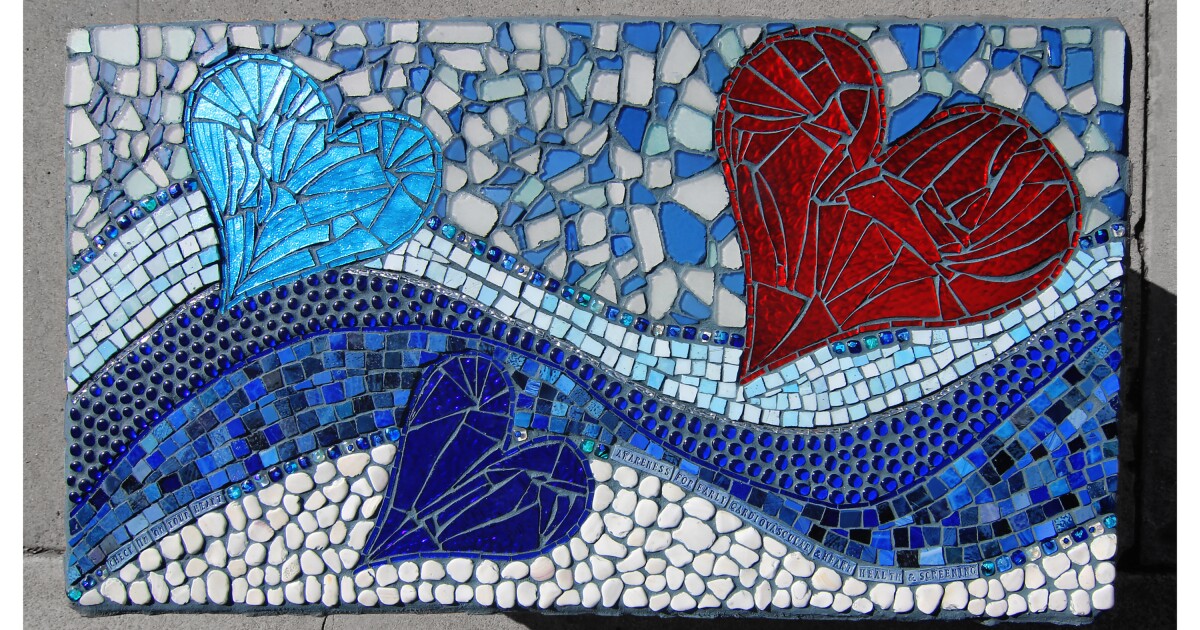 The bench, at 5661 La Jolla Blvd., is adorned with mosaic hearts and was commissioned in honor of former Bird Rock resident Nic Bureau. Artist Jane Wheeler said it was important for the family to share the message of ‘checking with your heart’, including early cardiovascular heart health and screening, and ‘checking with our hearts to ground us and connect to our inner wisdom”.

The Scripps Park Pavilion is open to the public; the celebration will take place at a later date

The long-awaited Scripps Park Pavilion restroom had a sweet and quiet opening on January 21, when the fence fell and the water turned on.

Steve Hadley, representing the office of San Diego Councilman Joe LaCava, whose District 1 includes La Jolla, told the Enhancer La Jolla board of directors at its Jan. 20 meeting that “we’re going to let people l ‘use and see if the plumbing and the showers and everything works when you put a lot of people in. Then we’ll celebrate the opening.

The project, which was introduced in January 2014, is a replacement “comfort station” in Ellen Browning Scripps Park adjacent to La Jolla Cove. The project included the demolition of the existing toilet block.

Construction was originally slated for the first part of 2019 for a summer 2021 opening, but an unexpected redesign of some features pushed the date back, according to project officials. Construction issues related to the COVID-19 pandemic also caused a delay.

LJCPA is looking for candidates for the next elections

The La Jolla Community Planning Association is seeking candidates to fill five available seats in its upcoming board elections.

Candidates must declare before the close of the February 3 online meeting, at which time they will have up to two minutes to introduce themselves and explain their reasons for applying.

The election will be by mail, with ballots counted on the day of the March 3 meeting. To be eligible to run for office, candidates must be members of the Community Planning Association and must have attended three of the LJCPA meetings in the 12-month period preceding the election.

LJCPA has been recognized by City Council for making recommendations to Council, the Planning Commission, City staff and other government agencies on land use matters. Learn more about lajollacpa.org.

Izpisua Belmonte, who was named one of Time magazine’s “50 Most Influential People in Healthcare” for 2018, pioneered gene-editing technologies, epigenetic editing methods, and regeneration and stem cell techniques to better understand how to reprogram and rejuvenate diseased cells. Recently, his lab showed how stem cell therapy could be used to treat type 1 diabetes, stimulate muscle regeneration and rebuild tissue. The team has also developed a chimeric tool capable of integrating human cells into animal tissues to examine a host of diseases that are difficult to study by traditional methods.

Despite demands to delay a vote, the San Diego Planning Commission on January 20 supported making legal changes to city documents associated with the proposed community planning group reforms. The group was not tasked with reviewing the proposal itself, but the changes that would need to be made to San Diego’s municipal code.

The meeting included nearly two hours of public testimony, many with questions about the finer points of the proposal and calls for the committee to withhold a vote until those points can be resolved.

Nonetheless, the panel voted unanimously to support the code changes, paving the way for the proposal to proceed to City Council in the coming months.

Commission chairman William Hoffman suggested that people “give as much feedback as possible before the city council meeting. …Send your comments to the council office.

This includes removing meeting attendance requirements to become a voting member; imposing new regulations on board composition to include tenants, business owners, landlords and more; impose a two-year severance after a person leaves a board; no longer providing municipal staff to assist with meeting operations and disputes; stop giving allowances to members of the community planning group; no longer waive call charges and more.

Pizzeria Dough Mom at La Jolla Shores has announced the winner of its Kids’ Design Your Own Pizza contest.

Dani Trejo, 7, won the contest with his pizza which includes grilled carne asada, refried bean sauce, mozzarella cheese, red onions, jalapenos and cilantro. He won a pizza night for his family and his creation is now on the menu at Dough Momma.

Dough Momma chose the winner from nominations submitted by local schools and families from ConnectMeda non-profit organization that provides ongoing care for children with physical differences due to birth defects or trauma.

Until February 14, customers who order online from Dough Momma can round up their bill to donate to ConnectMed.

ONI, a University of Oxford spin-off that recently moved its headquarters to La Jolla, said it raised $75 million in a second round of funding for technology that enables drug developers to observe single molecules on living cells.

The company manufactures the Nanoimager microscopy platform. It helps academic researchers, pharmaceutical companies and biotech companies create more effective and targeted therapies by allowing them to zoom in on complex cellular structures down to 10 nanometers. In comparison, a human hair is between 80,000 and 100,000 nanometers wide.

Additionally, ONI’s device is the size of a toaster. Other super-resolution microscopy tools can take up an entire room, the company says.

About 120 of ONI’s Nanoimagers are in use in laboratories today. — The San Diego Union Tribune

Shortly after entering orbit around Jupiter in 2016, the Juno spacecraft captured images of huge cyclones swirling in geometric patterns at the planet’s poles, an unexpected discovery that blew scientists away.

Jupiter’s poles are not clearly visible from Earth. The existence of cyclones was discovered when Juno became the first probe to enter polar orbit around the gas giant.

A new study from UC San Diego reveals another surprise: Cyclones are fueled by moist convection, the term for water vapor that rises and turns into a cloud. It’s very similar to the process that powers cyclones on Earth, a radically different world.

Earth has earth. Jupiter does not. The Earth has oceans made up of water. Jupiter has what scientists describe like a big ocean made up of hydrogen.

Even so, “the turbulence we see on Jupiter looks exactly like what we see here,” said Lia Siegelman, postdoctoral fellow at the Scripps Institution of Oceanography at UCSD in La Jolla. She is the senior author of a January 10 article in the journal Natural Physics which describes the phenomenon.

“It’s quite fascinating to see something like this on such a distant planet,” Siegelman said. Jupiter is currently more than 530 million kilometers from Earth. — The San Diego Union Tribune

The 90th Annual White Elephant Sale at St. James by-the-Sea Episcopal Church in La Jolla has been postponed due to the current outbreak of the COVID-19 coronavirus. The sale was scheduled for February 11-13.

Monetary contributions can be made to sjbts.org/white-elephant-sale-news.html. For more information send an e-mail [email protected]

— Compiled by the staff of La Jolla Light ◆