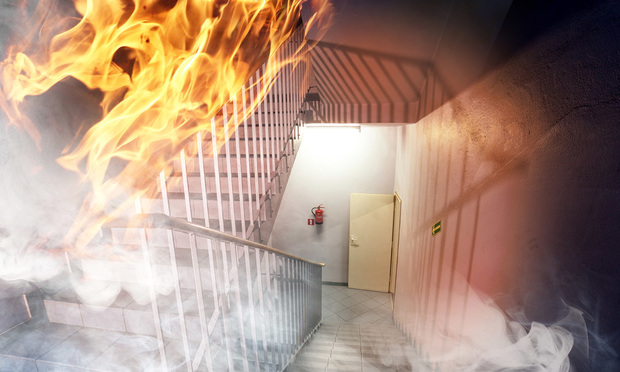 Is this smoke smell real or a phantom smell?

In a structural fire, pressurized heat and smoke can seep into the air, seep into walls, ceiling cavities, attics, and anywhere air can circulate. After the fire is extinguished, the porous materials begin the process of gassing and releasing volatile organic compounds (VOCs). These odors can last for years if affected materials are not properly cleaned, deodorized, encapsulated, or replaced.

Oxidizing gases such as hydroxyls or ozone, the use of HEPA vacuuming and air filtration and other cleaning methods can greatly reduce smoke odors and particulates. However, in some cases, standard deodorization methods may not work. Fitters should be aware that at the molecular level, any structure affected by fire or smoke may not be fully disinfected. Additionally, there are certain types of combustion byproducts in the air we breathe as well as chemicals and gases that current deodorization processes may have little or no effect on. Policyholders who have suffered a fire often misinterpret the process of deodorizing fumes as a guarantee of complete cleaning of the air, which in most cases is impossible to achieve.

When harsh smoke odors are encountered, deodorants or “reodorants” are often used to mask or camouflage them. Over time, these neutralizing scents dissipate and under the right conditions, whatever smoke odors are treated or concealed, they can reactivate and reappear. This is where the real problems can begin.

In situations where an insured reports the smell of smoke after the deodorization process is complete, the first reaction may be to try to minimize the possibility that an actual odor exists since all chemicals, deodorants and oxidizing agents must have does their job, doesn’t it? But then you have to ask yourself: “Could the culprit be a failure of the deodorization methods deployed, an overly sensitive sense of smell on the part of the insured, a desensitized sense of smell on the part of the expert, both, or something else ?

In this article, we’ll explore this question and take a closer look at smoke smells and one of the five most complex human senses – smell.

How does smell work?

The scientific term for the sense of smell is called olfaction. Olfaction comes from specialized sensory cells, called olfactory sensory neurons or OSNs, which are found in a small piece of tissue inside the nose. These cells connect directly to the brain and each has an odor receptor. The microscopic molecules released by the substances around us, whether it is the infusion of coffee, the smell of a flower or the scent of perfume, stimulate these receptors. Once the neurons detect the molecules, they send messages to your brain and it identifies the smell. There are more smells in the environment than there are receptors, and any given molecule can stimulate a combination of receptors, creating a unique representation in the brain.

When NSOs are damaged or inflamed, they can send a distorted signal to the brain. In other cases, the olfactory signal may be blocked. This blockage prevents the smell signal from reaching the nose or brain.

The human sense of smell is more sensitive than most might think. For example, odorous ethyl mercaptan which is often added to natural gas or propane as a warning agent can be detected at concentrations between 0.2 parts per billion (ppb) and 0.009 ppb. This is equivalent to about three drops of odorant in an Olympic-size swimming pool. Extremely low detection limits have also been reported for the odorous substances d-limonene and ozone. The lowest known human detection limit is that of isoamyl mercaptan reported at 0.77 parts per trillion.

If you manage enough fire losses, sooner or later you’ll run into an insured who will swear to smell the smoke after the catering company completes the deodorization process. Keep in mind that each fire has its own chemical makeup or DNA – the fuels that burned, the types of chemicals that reacted or interacted with, the duration of the fire, the intensity of the heat, the odors and the gases that fire generates all contribute to the uniqueness and toxicity of structural fire environments. In addition, many new chemicals are introduced into household products and building materials every year, many of which have never been tested or studied to determine the types of byproducts and potentially toxic odors they create. when burnt.

Before the restoration process begins, adjusters should consider the following steps:

Sean Scott is a licensed California general contractor who has spent over 43 years in the construction and restoration industry. Throughout his career, Sean has worked with all of the major insurers that underwrite residential and commercial policies and worked directly with adjusters, independent adjusters, third party administrators, adjusters and lawyers. He has written and co-authored a number of books on disaster preparedness and insurance, including “The Red Guide to Recovery – Resource Handbook for Disaster Survivors”.

Specialized cells that keep the heart beating have the ability to regenerate after birth, study finds