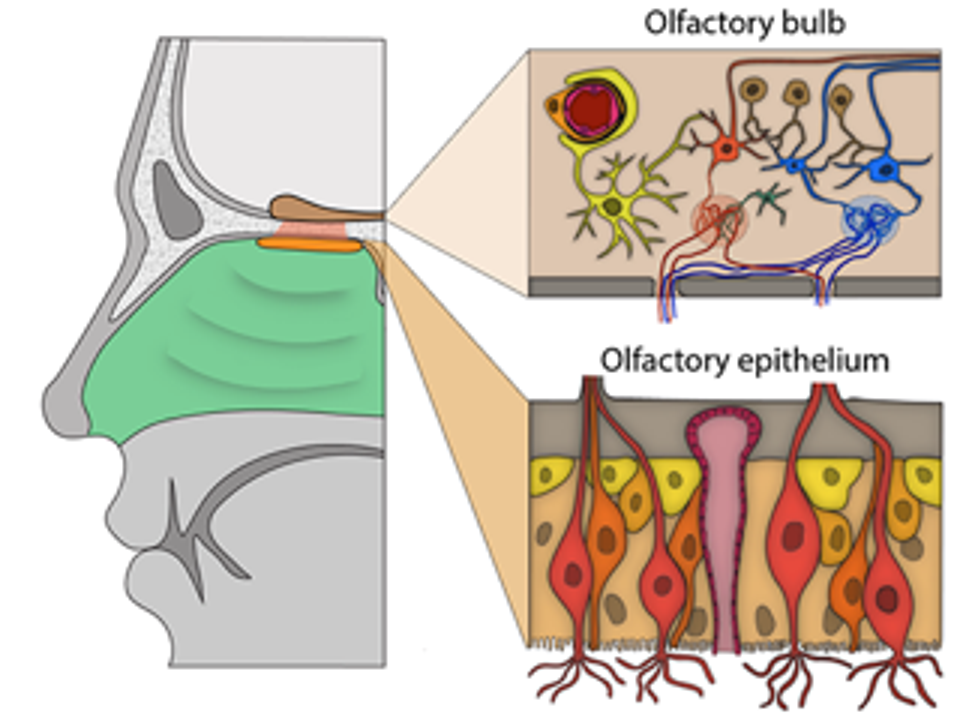 This is part of a series on SARS-CoV-2-induced damage to organs, tissues and cells.

One of the most defining symptoms of Covid-19 is the loss of smell without the experience of a stuffy nose, known as anosmia. This peculiarity of Covid-19 affects at least half of the people infected with the virus. In most cases, the sense of smell recovers after a few weeks, but twelve percent of people continue to report a total loss of sense of smell months after the initial infection. A recent to study researchers from NYU Grossman School of Medicine and Columbia University offer a possible explanation for how structural damage to olfactory cells can delay sensory restoration.

The indirect effects of Covid-19 infection

The first insight into how Covid-19 impairs the sense of smell came with the discovery that the virus does not infect olfactory receptor neurons involved in smell detection. Rather, the virus binds and depletes the sustentacular supporting cells, which surround the olfactory receptors in the epithelium. Unlike receptor neurons, sustentacular cells express membrane proteins ACE-2 and TmPRSS2 that SARS-CoV-2 uses to attach to and invade cells. Although the olfactory receptors are not directly infected, they undergo significant damage due to the infection of neighboring cells.

The olfactory bulb is one of the few sensory organs that regenerates its cells. When an olfactory receptor is damaged, the olfactory bulb generates new receptors to replace them in a process called neurogenesis. Unlike other types of neurons, olfactory receptors regenerate throughout an individual’s lifetime, preserving important pathways for differentiating between different odors. However, widespread damage to olfactory neurons can impair or completely obliterate the sense of smell. In the majority of Covid-19 cases, the sense of smell recovers with the replacement of damaged olfactory neurons and supporting cells.

Researchers are just beginning to understand the indirect effects of viral infection on the olfactory system. The next question asks: If the virus does not directly infect olfactory neurons, what explains the nerve cell damage that contributes to the lasting loss of smell? Understanding these effects in the olfactory system may provide additional insight into how the SARS-CoV-2 virus affects the nervous system as a whole.

To examine the effect, Zazhytska et. al studied infected hamsters, as well as human autopsy samples previously diagnosed with Covid-19. Hamsters are ideal models because they rely more on their senses and are more susceptible to nasal infections than humans. The researchers exposed the SARS-CoV-2 virus intranasally to anesthetized hamsters. They studied in detail the effects of the virus in hamsters, then examined post-mortem nasal tissue to see if what they found in hamsters was similar in humans.

Initial observations of the olfactory epithelium detected viral infection in sustentacular supporting cells, but not in olfactory receptor neurons. Their second analysis took a closer look at the structure of these nerve cells. To their surprise, they found the disruption of a protein network in the neuron’s nucleus, called the olfactosome. The specialized organization of the olfactory network facilitates interactions between chromosomes important in generating the sense of smell.

When an odor is detected, several membrane proteins of an olfactory receptor are activated, called G-coupled proteins. The binding of an odor to these receptors induces a sequence of transduction signals that trigger the activity of various proteins and d other molecules. These transduction signals tell the olfactory receptors to alert the brain that an odor has been detected. However, how these cells are able to coordinate these extensive signaling pathways has been an important area of ​​research. Current theories suggest that the answer lies in the nucleus, where DNA is folded and organized into specific conformations that make up the olfactosome. Olfactory genes are distributed on different chromosomes. To express these genes, the chromosomes must be close to each other. The olfactosome facilitates these interactions by bringing distant chromosomes closer together, through a process that is still poorly understood.

If the virus doesn’t infect these neurons directly, why does the loss of smell or stinky smell last so long? Another finding suggests that key signals that regulate gene expression in the olfactory nerve cell associated with the neuron’s ability to respond to odorants are altered. The signal transduction process involves several genes important for odor detection. RNA sequencing of hamster nasal tissues revealed that Covid-19 infection downregulates or reduces the activity of several genes involved in the perception of different odors. The researchers hypothesized that the reorganization of the olfactosome disrupts key transcription factors that determine which genes are expressed and when. These changes then alter the orientation and subsequent expression of olfactory genes, which persist even after virus clearance, forming a sense of “nuclear memory” that delays sensory restoration.

An additional question asked about the extent to which viral infection contributes to these abnormalities. In particular, are these changes mainly related to nearby infection or systemic infection via the bloodstream? By collecting blood serum from infected hamsters and neutralizing the SARS-CoV-2 virus, the researchers found that immune activity alone induces similar biological responses. This suggests that neighboring cells do not need to be infected to see an impact on olfactory neurons. On the contrary, components of the immune response that circulate in the bloodstream, such as cytokines, chemokines and other immune products, can cause widespread damage.

Finally, the researchers asked if these effects were similar in humans by examining nasal tissue from cadavers. Their research confirmed the downregulation of olfactory receptor genes and components of signal transductions that contribute to loss of smell. Downregulation of olfactory receptors and signaling genes provides a likely explanation for prolonged loss of smell following Covid-19 infection. However, we cannot rule out possible hamster-specific biological factors that might interfere with this theory.

The findings of this study demonstrate that “smell relies on extremely ‘fragile’ genomic interactions between chromosomes,” said co-corresponding author Benjamin tenOever, PhD, professor in the Departments of Medicine and Microbiology at NYU Langone Health. Although this provides an explanation for the persistence of loss of smell, further investigation is needed to understand why the recovery of olfactory neurons distorts the sense of smell and, more importantly, how long-term Covid-19 symptoms affect brain tissue.

Studies suggest that certain cytokine proteins, which coordinate inflammation in response to a pathogen, can cross the blood-brain barrier and enter cerebrospinal fluid. Therefore, there are significant concerns that the viral infection may interfere with cognitive functions. This could explain why some people exposed to the virus suffer from brain fog, headaches and other neurological effects weeks to months after infection. Similar to the pattern of infection seen in the olfactory system, the neurons themselves are not infected but rather the supporting epithelial cells neighboring the brain cells. Since these effects cannot be ethically studied in humans, exploring these cognitive effects in hamsters and other model organisms provides the best insight into how the virus may be impacting our brains.