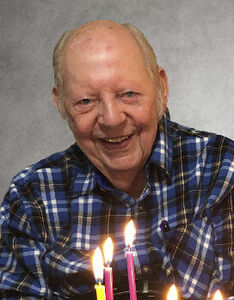 Fred A. Muellerleile, 97 years old from Mankato, died on October 21, 2021 at the Pillars of Mankato.
The funeral will be at 1:00 p.m. on Wednesday October 27, 2021 at St. John the Baptist Catholic Church in Mankato. Visitations will take place one hour before the church service. Interment will be in the Calvary cemetery in Mankato. The Mankato Mortuary helps the family organize themselves.
Fred was born in Elysian Township Le Sueur on October 27, 1923 to Herman and Elizabeth (Frederick) Muellerleile. He graduated from College High School in Mankato, Minnesota, in 1941. He was the last graduate of his class.
He was a mechanic for two and a half years at Fort Lewis Mt. Rainier Ordnance Depot in Washington State. He had been a member of the Catholic Order of Foresters since 1942, a member of the American Legion, past chairman of the board of directors, and former chairman of first aid for the American Red Cross. In addition, he was a member of the Elks, Moose and National Safety Council, the Minnesota Safety Council and Chairman of the Region 9 Safety Council. He taught industrial safety at Vo-Tech for several years and was a former member of the Masons with Father Fred Woodford.
Fred worked at the Minnesota Department of Transportation most of his career. First as a mechanic where he maintained 12 patrol cars for 13 years, then as a maintenance manager for 3 years. He was promoted to security coordinator with several positions for 18 years before retiring in March 1988.
He was married on September 1, 1953 to Dixie Lee Wirig at the former St. John’s Catholic Church. He has been a member of St. John the Baptist Catholic Church for 68 years.
Two things Fred hoped would be remembered from the many years of working at Calvary Cemetery in Mankato. He has been a member of the Calvary Cemetery Council for 40 years and Supervisor of Operations since 1988. He was responsible for all restorations, in particular the restoration of the Chapel and the design and construction of the Rosary Garden. For his work, he received two bishops’ medals, one in 2006 and one in 2015.
Fred also hoped that his idea of ​​putting toilet paper on the cracks and joints in the road that were filled with hot poured rubber was remembered. He also designed a toilet paper applicator. This idea made traffic control easier and the rubber did not stick to the vehicle’s tires. Fred’s idea is used around the world.
Fred was predeceased by his father, Herman Muellerleile; mother, Elizabeth (Frederick) Muellerleile; sisters, Betty Briley and Judie LaFrance; brother, Kenneth Muellerleile; and brothers-in-law, Bud Briley and Don Olsen.
He is survived by his wife, Dixie Muellerleile and his daughter, Mary Fowler; grandson, Dr James Fowler and wife, Dr Jana Fowler; grandson, John Fowler and husband Michaël Dumais; two great-granddaughters, Sarah and Elizabeth Fowler; sister, Rita Olsen; brother-in-law, Mike LaFrance; and many cousins.
We are all going to regret his good stories. Thank you to the Pillars of Mankato for their compassionate care.