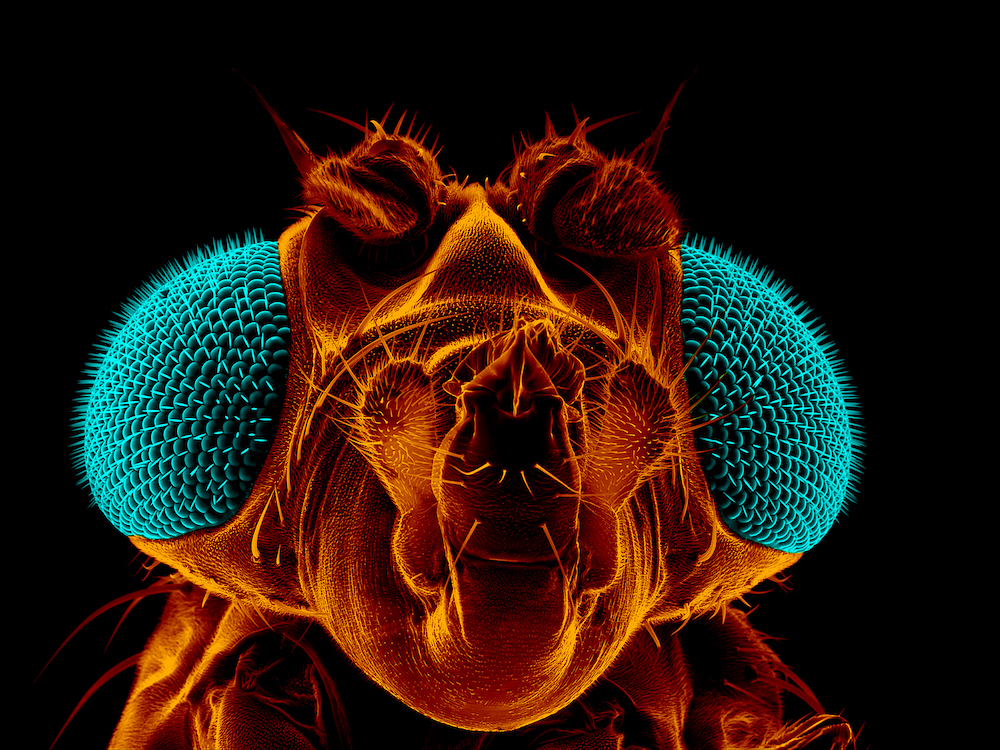 Unless you think of Jeff Goldblum’s humanoid-insectoid character in The Fly, you probably don’t think much of fly brains. What can one of the most crushed insects tell us anyway?

Brundlefly hasn’t made any appearances in anyone’s lab (or teleportation machine). What a team of researchers led by Ralph Greenspan of UC San Diego discovered is that flies have cognitive abilities far beyond what we thought. When Greenspan built a bug-sized virtual reality arena to convince the flies that they were actually flying outside, he found that they showed signs of attention, short-term memory, and even a semblance of consciousness.

To find the area of ​​the fly’s brain where memories are formed and then dissipated, Greenspan, who led a study recently published in Nature, had to pinpoint a certain gene.

“We targeted the expression of a potassium channel gene that short-circuits cells so that they are silenced,” he told SYFY WIRE.

It turns out that the ellipsoid body in the brain of the humble fruit fly echoes aspects of the mammalian cerebral cortex. That’s pretty huge for a creature that only has about 100,000 neurons compared to our 100 billion. Flies use this structure to navigate. The neurons in the ellipsoid body are arranged with their axons, or long tail-like ends, in circles within circles, ready to zap impulses from one neuron to the next. This arrangement depends on a protein known as semaphorin, which tells axons what to do. Semaphorins also influence axons in the mammalian brain.

The cerebral cortex in mammals is obviously much more complex than anything a fly could dream of. It’s the outermost layer of the brain that takes care of everything from motor function and concentration to sensations, emotions, vision and even smell, but don’t underestimate flies yet. . Greenspan built a panoramic arena to provide the flies with a fully immersive virtual reality experience. They were attached, but the VR system was constantly changing based on their wing movement, so they felt like they were free and buzzing.

“The relevance of the fly brain to the human brain can be inferred from our knowledge of the molecular homologies (in gene expression in development and in physiological mechanisms) that have traced the common evolutionary roots of fly and animal brains. mammals,” Greenspan said.

The flies went through training that would later help them perform conditioning tasks. They learned that they could move away from an image associated with increased heat and towards an image where it was cooler. Next, visual stimuli were deliberately shown to the insects, either simultaneously with heat or with heat a few seconds after a stimulus was flashed in front of them. This is where it starts to get a little weird. This intermediate time, or “trace interval”, is when the fly’s brain latches on to a “trace” of what it has just seen. This also happens in mammals. Does it remind you of something, like a memory?

Not only did the flies show that their short-term memory was activated, but it also became apparent that they could be distracted. It only took a slight breath of air to dismiss them and blur visual memory. This is the first time that the tendency to get distracted has been proven in flies. So they can remember, pay attention and be aware of what is happening around them. There’s obviously a lot going on behind those compound eyes.

“We hope to dig deeper into the molecular mechanisms of the fruit fly brain, including its kinetics, and map the interactions between all brain regions (of which there are more than the necessary ones we have shown),” Greenspan said.

Anyone who ever doubted the cognitive abilities of flies can now buzz.