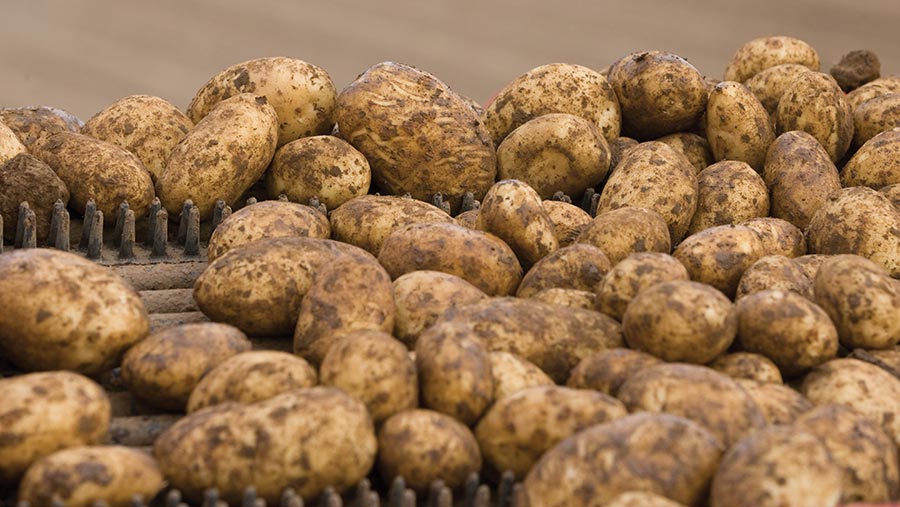 Are no-till potatoes a pipe dream?

Early trials by Dyson Farming and Groundswell Agronomy highlight just how commercially challenging no-till potato production is likely to be.

Dyson Farming is increasingly moving towards reduced cropping in other crops on its farm – tillage has been reduced by 60% over the past two years, with 45% of the acreage having a cover or catch crop each season, but potatoes are a sticking point, says the company’s Tom Storr.

A more regenerative approach to potato production would help him maintain the soil improvements resulting from these changes, while potentially reducing costs and opening up potato production to land where it is currently not. possible, like the moors.

Initial trials over the past two seasons have targeted no-till potatoes, with 120 seed potatoes planted under straw in 2021. Establishment has been uneven, after mice and slugs drastically reduced the emergence.

“They were also typically about three weeks behind in their growth stages compared to conventionally grown potatoes,” Storr says.

“If we were going to do this on a commercial scale, we would probably have to plant a lot earlier.”

Digging samples suggested that straw potatoes without seedbed nitrogen yielded about 48 t/ha compared to about 68 t/ha for conventionally grown potatoes.

Levels of common scab in straw potatoes were lower, possibly because the potatoes had remained moist for a continuous period.

Harvesting with a commercial trailed machine was possible with a generally clean sample, although a few straws passed through.

A larger area to set up the harvester should prevent this, or using a self-propelled machine with a better cleaning system, suggests Storr.

The test is repeated this season in 50 m beds, mulched with and without nursery nitrogen, and another bed covered with digestate.

The inspiration for Dyson’s trials came from a no-till demonstration at Groundswell in 2015, which was repeated at the event this year.

Emergence has also been uneven, with mice and slugs being a problem, says Richard Harding of Groundswell Agronomy.

Another challenge is the next rotation with large amounts of waste, he says. “Our idea is to plant a wide-row crop, like sweet corn or squash, to grow a high-value crop, while allowing the trash to continue to decompose, before planting a grain crop.”

An alternative approach, which Ben Taylor-Davies has implemented on his 32ha of potatoes in Herefordshire, is to do everything possible to mitigate the crops required for potatoes.

“I tried with a rye crimping system, applying compost to plant potatoes on top, irrigating tape and mulching, to see if we could grow potatoes commercially. We did it enough to know that we had lost so much money that we couldn’t go on anymore,” he says.

This led him to realize that cultivations might not be as bad as some suggest. “Nature regenerates through floods, fires, starvation or massive hoof impacts, so are crops that bad?” he asks.

“So I changed tactics and I see potatoes as fire, starvation being part of my rotation.”

His potatoes follow a spring crop, with a high biomass winter cover crop planted in between, which is grazed with sheep to initially take 70% of the growth, with the remaining 30% grazed just before planting the potatoes. potatoes.

Planting is done in a single pass with a plow and a planter. “At planting time, we use Johnson-Su Compost Extract, focusing on restoring biology as we disrupt the biological balance of the soil.”

By filling the floor with biology, he claims that potato cyst nematodes and rhizoctonia are kept at bay. He also plants buckwheat, peas and vetch at the same depth as the tubers as a companion crop.

“The vetch and buckwheat acidify the rhizosphere around the potato tuber, which solubilizes more phosphate, as well as the Johnson-Su extract so we can extract the huge amounts of phosphate in our soils.”

With peas and vetch also fixing nitrogen, plus what was in the cover crop, Taylor-Davies finds that he only needs to apply 10 kgN/ha of foliar nitrogen based on urea, with added sulfur and carbon.

The other role of companions is to encourage beneficial insects in the potato crop.

“If you cross a flowering crop before it flowers, there’s often a lot of benefit already,” he says.

“Plants have an incredible ability to leak nectar from their stems to begin increasing their numbers before flowering begins.

“On the back of this, ladybugs, lacewings and hoverflies grow, which has a huge effect on aphid populations.”

It has also changed its nutrition – moving away from chlorinated forms of potassium as the salts exacerbate problems and make crops thirstier. This has reduced irrigation.

It uses sap analysis to better understand plant health, with foliar applications of magnesium sulfate, even if the soil is rich in magnesium, which better responds to applications of potassium, phosphate and nitrogen. “We manage excesses rather than deficiencies.”

The crop is lifted at the end of August, that is, when the blight often comes in the crop. Getting up earlier helps reduce the number of blight sprays needed – last year he applied none.

After lifting, during which he avoids tampering with the field with trailers, he immediately plants a cover crop to start the sanitation process.

“We do soil carbon measurements throughout the rotation, and last year we had no drop in our carbon levels after potatoes. It’s a year, a trial, but we’re repeating it this year.

After consumers loved buying different colored eggs from his farm, Ben Taylor-Davies plans to produce a multi-variety potato pack with explanations of which ones would suit different cooking styles.

“Essentially, it would be to provide a selection of free-range pick-your-owns.”

This follows the decision to plant seven to nine different species of processing potatoes this season. “Diversity is something we strive for. We know the blends work with wheat, barley and other crops.

“It creates its own issues as to whether to separate or use directly in the processor as a blend, or produce these multi-variety bags for a supermarket.”

“Across all of our businesses, we look at cover crops where we can, but also when and what type of crop we undertake. In the majority of our potato acreage, we continue to plow, till and form beds.

“The results show that there isn’t much of a difference in yield taking a crop – then it’s a matter of quality and ease of harvesting.

“If straw potatoes have legs in commerce, I think we would still be reliant on some form of cultivation to smooth the surface to prevent damage to machinery,” he concludes.

Ben Taylor-Davies, Richard Harding and Tom Storr were speaking at a seminar titled “Do Potatoes Have a Place in a Regeneration System?” at the Groundswell event held earlier this year in Hertfordshire

Learn to live with rejection