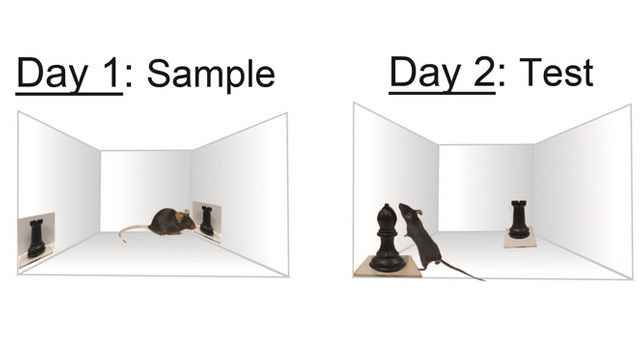 An image or reality? Mouse brains can inherently differentiate between the two

A picture is worth a thousand words, especially when it triggers memories of the object photographed like a vacation photo. 2D visual stimuli, such as images seen in print, on television, or online, are often how humans learn about real-world objects. In such formats, 2D stimuli act as symbols of the actual physical item.

The ability to perceive that a 2D image of an object corresponds to its physical 3D form or “image-object equivalence” is a cognitive function thought to be exclusive to higher-order species such as primates and some birds. It has been suggested that this “representational insight” may be beyond the capability of rodents or pose substantial problems in experimental design.

A study by researchers at Florida Atlantic University challenges this theory and provides the first-ever behavioral evidence that laboratory mice are capable of high-level image-object perception abilities. They confirmed that mice perceive the inherent difference between the image of an object and the 3D object itself.

Using a modified object recognition task, the researchers allowed naïve mice to view photographs (2D stimuli) of an object during a sampling session. The next day, the mice received a new 3D object and the actual 3D object seen the day before in 2D photography.

Interestingly, the results of the study, published in Scientific reports , showed that the mice overwhelmingly preferred to explore the new 3D object rather than the “familiar” 3D object. This first-of-its-kind evidence reveals that mice can successfully perform a picture-object equivalence cognitive task reminiscent of those used to test visual recognition memory in children and non-human primates. Importantly, these results suggest that after encoding the 2D visual stimuli, the mice used higher-order cognitive processes to associate the 3D item with the recalled memory of the 2D referent.

The results also indicate that the mouse hippocampus (a primary structure of the brain’s medial temporal lobe memory system), like that of humans, contributes significantly to the representational or transitive inference necessary for image-equivalence. object. Moreover, they discovered that the image memory, necessary for such higher-order inference, depends on neuronal activity in the dorsal hippocampus from the CA1 region.

If mice spent enough time (more than 30 seconds) viewing images of an object, they could then distinguish between a “familiar” 3D physical object and a new 3D physical object, even when the low visual strategies level were checked. This ability for image-object equivalence occurred regardless of symmetry, likeness, viewing angle, composition, and image realism. Even when low-level visual characteristics, such as color and luminance are controlled, mice are still able to generalize from a 2D image to a 3D object.

“In primates, the hippocampus is thought to play a critical role in declarative or explicit memory allowing an individual to replay a ‘story’ of a previously encoded experience,” said Sarah J. Cohen, Ph.D. , first author and a post-doctoral fellow, FAU Center for Complex Systems and Brain Sciences and FAU Jupiter Life Science Initiative. “We suggest that this ‘story’ helps to recognize the elements learned in image form when they are then presented in 3D form. The mouse hippocampus probably encodes and consolidates the exploration of the image as the “story” of that experience or event, in a specific context as a form of explicit memory.

Recognition memory is well established in mice, but the results of this study extend this research to indicate that rodents are capable of advanced visual recognition and indirectly learn about real objects by viewing images. The role of the hippocampus may be to retrieve memory from the image explored during the sampling session, against which the mouse may appropriately match one of the items available during the test session.

“Mice can make perceptual and conceptual judgments about presented task stimuli, which is surprising given that image-object equivalence has been considered a defining ability of primates,” Stackman said. “Taken together, our results provide compelling evidence that the mouse can serve as an effective model organism to study sophisticated higher-order aspects of mammalian visual perception and recognition.”

This article was republished from the following materials. Note: Material may have been edited for length and content. For more information, please contact the quoted source.

A Farmer’s Pages: A Little Help Here and There | Food