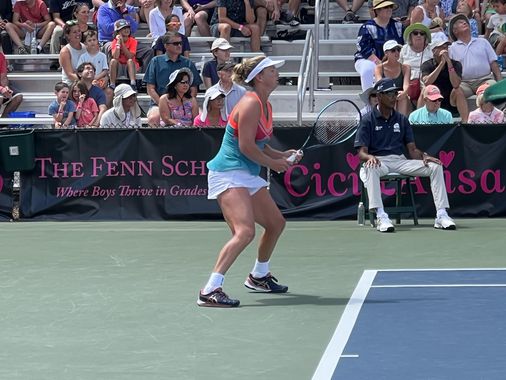 Vandeweghe, 30, once a debutant on the professional circuit with the WTT Lobsters roster when they were based in Worcester (2010-11), will face Croatian Bernarda Pera here in Thoreau’s WTA 125 Final on Sunday.

The latest sports headlines from The Globe delivered to your inbox every morning.

Pera and Vandeweghe have only faced each other once before, with Pera finishing first in a three-set match in Adelaide, Australia in 2018.

“It was a good…a long…it ended 7-5 or 7-6 in the third,” recalled Pera, who arrived in Thoreauville after winning back-to-back European titles (Budapest ; Hamburg) last month. “She’s an aggressive player. Big serve. Big forehand. Even with the injuries she’s had, she’s just a great player.

The 6-foot-1 Vandeweghe, after winning the first set on Saturday, trailed 2-1 when Wang broke her in the third game of the second set. But she came back level 2-2 and then gained a foothold in the game when she beat Wang again to make it 4-2. She served the decisive 6-3, struggling 15-40 and winning on her first match-point chance.

“I think I handled adversity well today,” Vandeweghe said, ahead of a return to the US Open, where, despite a soft foot, she won the doubles title in 2018. in partnership with Ashleigh Barty. “I think I could have done a better job on the second serves – getting them to play earlier, making them feel pressure.

“But overall you can’t be upset about the win.”

A title here, though it may pale in comparison to when she played regularly in Grand Slam events, would be more meaningful to Vandeweghe. She hasn’t won a WTA title since before the industry’s extended COVID shutdown in 2020, which she’s done all the longer with her, shall we say, hard work in the kitchen.

“Yeah, severed my little finger,” Vandeweghe said, raising his left hand to show a visitor his repaired, albeit slightly bent, finger. “So I couldn’t use my left hand. So yeah, that means I’m working on my two-handed backhand again.

The finger fell prey to an overheated bowl that exploded, Vandeweghe said, as she took it out of the microwave at her home near San Diego.

“It was too hot and should have been on the stove,” she recalls. “A bad mistake.”

“I still don’t have a full move on it,” she said, flexing the slightly stubborn finger as proof, before heading to the gym here for her post-match workout. “But do the best you can with what you have, right?”

Vandeweghe will also play for a doubles title on Sunday, paired with Muscovite Varvara Flink. Following her win over Wang in the singles, Vandeweghe teamed up with Flink in a 6-3, 6-2 win over Mirjam Bjorklund (Sweden) and Fernanda Contreras Gomez (Mexico).

Sunday’s final match, after the singles match which starts at noon, will see Vandeweghe and Flink take on Peangtarn Plipuech (Thailand) and Moyuka Uchijima (Japan) for the doubles title.

The Pera-Vandeweghe finale will feature two hard hitters, with Pera slightly shorter and more nimble, perhaps more inclined to come to the net.

Facing the watchful receiver Scott on Saturday, Pera won his first two games but needed extra time to get his serve in sync. She tied it at 2-2, in the first set, winning a service game that took her 14 points and 10 minutes to get the job done. She later beat Scott for a 5-4 lead to grab the first set and then cruised through the second.

The Vandeweghe-Wang match drew over 300 people, then only 200 people watched Pera-Scott. . . Vandeweghe fondly recalls his days in the Bay State with the lobsters. “I have to see a Sox game!” she recalls. “I was so young and just enjoying a bit of the summer here on the East Coast…I really had a great time. Bud Schultz was the coach and he was amazing. I made lifelong friends outside of those teams, with Eric Butorac and Jan-Michael Gambill. I am still in contact with all these people. . . . Unlike the sweltering heat and humidity earlier in the week, Saturday’s game was mostly played under partly sunny skies and temperatures in the mid-70s, which one visitor suggested to Vandeweghe was more like California weather. “A little cold,” she said, adding with a laugh, “but I like it.”

Kevin Paul Dupont can be reached at [email protected]